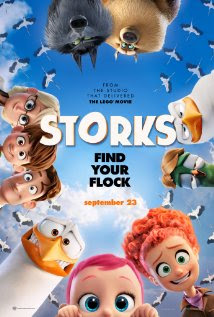 Starring: Andy Samberg, Katie Crown, Kelsey Grammer, Jennifer Aniston, Ty Burrell, Anton Starkman, Keegan-Michael Key, Jordan Peele, Danny Trejo, Stephen Kramer Glickman, and more.
Directed by: Nicholas Stoller and Doug Sweetland Written by: Nicholas Stoller Cinematography by: Simon Dunsdon Music by: Jeff Dana and Mychael Danna
Premise: Storks used to deliver babies to expectant parents. But that is a function they've not provided for almost two decades. They now deliver packages worldwide. And Junior's been told he's about to be promoted to "Boss". All he has to do is fire the human - Tulip. The storks are responsible for taking care of her ever since her failed baby delivery 18 years before. Now that she's come of age, though, she's no longer their problem and Hunter wants her out. Junior can't bring himself to fire her outright though. And through a series of events, Tulip inadvertently activates the baby factory.  Due to a messed up wing, Junior must have Tulip's help to deliver the produced baby before Hunter finds out about it and his chance to be the "Boss" is ruined. (Rated PG)
Review:
1) Voice Acting - Total Thumbs Up: Andy Samberg and Katie Crown play off each other well  as Junior and Tulip. Kelsey Grammer was awesome as the head stork, Hunter. (The whole "Bossssss" sequences are too funny!) Anton Starkman was adorable as the lonely and ignored Nate Gardner. Jennifer Aniston and Ty Burrell as Nate's over achieving parents were a hoot. And I adored Keegan-Michael Key and Jordan Peele as Alpha and Beta Wolf. (The wolves rocked!)

2)  Artwork/Animation - Total Thumbs Up: Warner Brothers Animation did a great job on the film. The texture for the feathers, especially when ruffled, looked great. They also seemed to have had a lot of fun playing with Tulip's hair. (Her bored scene and changes in hair to pretend to be other people was too funny!)
The baby at the crux of the problem is beyond adorable. And the babies later on are an overdose of cuteness!
The wolves were such a fun treat! Not only funny, but they have mad skillz! ROFL. Animating their antics and making them look believable definitely deserve some well earned kudos.
A lot of subtext in the art with regards to buildings and working environments. And the Titanic reference was priceless!

Loved all the cool inventions, too. The fully working baby factory was awesome! :)
The Ninjago short before the main film was darn funny and looked great. The Chicken vs. the Master. (Since hubby's been killed by a chicken on an MMO, it made this even funnier! heh heh)
3) Plot/Story - Total Thumbs Up: A simple premise filled with a lot of deep issues and themes. Storks are not the only way to get babies. They did mention this important detail for when we're informed they stopped delivering kids - lol. Junior seems to be living the dream, rising quickly to the top. But as the story unfolds, we get bits and hints showing all is not as wonderful as everyone thinks they are.
The same is true for Nate. His parents are go getters. They run a successful house selling business from their home, but they've lost their way. They've forgotten that by only craving success they've left something even more precious behind.

Lots of interesting characters and bizarre personalities!  Pidgeon Toady is a little scary. :P
Family, responsibility, denial, and allowing oneself to care for others than money - these are just a few of the themes explored. If you've ever been a parent, you'll see a lot in there that will make you nod. You'll know exactly what they're experiencing because you've been there. lol.
Conclusion: Storks is an adorable and surprisingly deep film. Lots of unexpected and cute bits. And the power of the pack! Go Wolves!
Rating: 3.75 out of 5 (Hubby's Rating: Pay Full Price to See Again)
Posted by Gloria Oliver at 9:48 PM