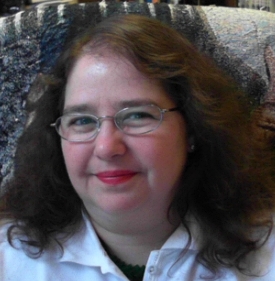 Gloria Oliver, slave to her feline and puppy masters, lives in Texas.  She's the author of nine fantasy, science fiction, cozy mysteries, and YA fantasy novels with more on the way.

This blog is a work in progress where she hopes to share fun stuff, make announcements, and occasionally even say something profound.

She is a member in good standing with Broad Universe though has yet to work her way into the top list of Cat Slaves R Us.


The OMG I Want To Know More About Her So Bad So Tell Me Already Version:

I was born in Puerto Rico in 1964. Puerto Rico is a Commonwelath of the United States set in the crisp blue Caribbean Sea. It's a small island, about 50 miles wide and 100 miles long. It's in the tropics, so while I had seen snow on TV, I never actually got to experience any until we moved to the continental US in my teen years. (First time I experienced true cold for the first time, too. Brrr!)

I spent time in Ohio, Texas, New Hampshire, then back to Texas again where I've been ever since.

I started writing in my teens just to get a couple of ideas out of my head where they wouldn't bother me anymore. But I didn't really get into it full time until after I was married and met a wonderful group of people doing an Amateur Press Association on a Japanese cartoon called Gatchaman (Battle of the Planets in the US.) Not only did the people in this APA talk about the show, they also wrote stories about the characters. Once again I was bitten by an idea and attempted to put it to paper. It was pretty abysmal, but thanks to the enthusiasm and encouragement of one of the members (Yes, Wendy, this is all you fault!) I kept at it. Between the members's comments and Wendy's never ending patience, I slowly honed the craft and learned things from it as well. (Weirdly enough there are some things about writing you don't notice or can't learn unless you are just doing it!) :-)

Thanks to an idea sparked by my husband, I wrote my second novel. (The first, which I'd started back in those teenage years, and which, I'm embarrassed to admit, got sent to a number of major publishers, and has been hidden away somewhere where it will not soon see the light of day. Yes, before I got a clue, I was sending out one of those awful manuscripts that gets touched only with tongs and returned from the slush pile even as those sending it back wondered why I ever bothered. Sigh. It really is hard to see ones own problems in the writing especially when first starting out...)

After many revisions, some beta testing (thanks again Wendy!), a short stint with an agent, some close bites, and waiting, waiting and waiting (yes, trying to sell your writing requires a ton of patience!), I finally realized that I was getting nowhere. It was time to get over my shy inhibitions and do some networking!Â

And it paid off. Going to ConDFW here is Dallas I was able to go to several panels and hear a lot of stories from newcomers and old pros. It was an eye opening experience. And while I do not discourage anyone from doing so, unlike my original thought that unusual works would sell better to the big boys, I had the rude awakening that in actuality this was not the case anymore. However, do NOT try to become a cookie cutter writer because of it, just try to understand it might take a little longer to sell something truly original. Readers will be happy if you hold out, keep at it, and put it out there. Just be aware it will not make things easier.:P

Anyway, I made a couple of peripheral contacts there--meaning I met some people from afar and decided to check out their web sites. (Yes, I am actually quite shy! I hate encroaching on people. But if we ever become close, watch out!) :-) Through a number of coincidences, I was keeping an eye out on Jeffrey Turner and Yard Dog Press. From their news I learned about Zumaya Publications. I sent them sample chapters and synopsis of the three manuscripts I had in the queue (No, not that first one! It's still hidden away) and they accepted both In the Service of Samurai and Vassal of El.

Since then, I've sold a few short stories and been included in several anthologies. Several small presses accepted other novels, though two of them have gone out of business since then. In 2021 I switched gears and have my first series, a cozy historical—the Daiyu Wu Msyteries!
Check out my website for more info on my books, short stories, free reads, and where to get them. :)

Now I continue to learn all sorts of things about marketing and sales! A lot more work than writing books, let me tell you! Whee!

And what do I do in my spare time? (I have some?) I read (very important if you want to write), I write (yeah, this one too), go to the movies, read Japanese manga (comics), watch Japanese anime and Korean dramas, and attempt to destress from work.