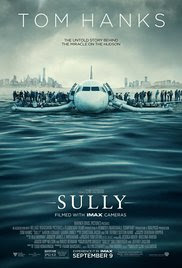 Starring: Tom Hanks, Aaron Eckhart, Laura Linney, Valerie Mahaffey, Delphi Harrington, Mike O'Malley, Jamey Sheridan, Anna Gunn, and more.
Directed by: Clint Eastwood Screenplay by: Todd Komarnicki Based on the Book by: Chesley Sullenberger and Jeffrey Zaslow Cinematography by: Tom Stern Music by: Christian Jacob and the Tierney Sutton Band
Premise: After landing flight 1549 on the Hudson River in NY, Captain Chesley "Sully" Sullenberger finds his life turned upside down. Immersed in a surreal environment; he must deal with PTSDs and self-doubt. But also fans, and several agencies hoping to prove his water landing was a mistake rather than a miracle. (Rated PG-13)
Review:
1) Acting - Total Thumbs Up: Tom Hanks continues to amaze with his developed acting skills. He's a master at taking a average people and surprising you with unexpected depths of feeling when you least expect it. Laura Linney gave a wonderful performance as Sully's wife. Aaron Eckhart, who played first officer Jess Skiles, did an amazing job as well. All the acting was top notch.
2) Special Effects - Total Thumbs Up: I loved the subtlety of the special effects on the film. The nightmares as well as the actual landing looked real. Cool engine explosions as well.
A ton of kudos for actually using an interior of a plane that is realistic! Narrow aisles and all! lol. The deployment of the emergency equipment and the slow flooding and sinking of the plane looked amazing!
3) Plot/Story - Total Thumbs Up: The film starts in the middle of a nightmare - giving the audience their first hint of Sully's PTSD's and stress as he waits to meet with the different agencies to discuss the events of January 15th, 2009. As the story unfolds the audience is taken back and forth to learn more of the man and also the day of the event.
One thing I liked about how they told the story is the inclusion of the lives of others. While a standard film tactic in disaster films, it worked even better in this context.
We see the captain's own doubts and fears as the media and other agencies try to wear him and his family down. And as the day gets relived in the film, we get to see the events unfold from all sorts of angles. A nice well rounded look at an amazing event.
One neat thing I realized later about the film is how they subtly acknowledged how the successful landing touched the lives of New Yorkers. This is a city that less than a decade before, had suffered a major disaster at 9/11. The fact Sully was able to avert another disaster from staining the city visibly touched the souls of those around him. The Manager at the Courtyard by Marriott shows this unspoken feeling more aptly than words ever could.
4) Stunts - Total Thumbs Up:  The chaos inside the plane, people jumping into freezing water or shooting down wet slides, showing the jobs of rescue personnel - the stunt crew did a great job on all of it. It is the efficiency of those doing their jobs as they would on any given day that makes the acts even more amazing.
Conclusion: "Sully" is a fascinating look at the man, the people and the events of flight 1549. The deed is easy, it's the aftermath you have to look out for.
Rating: 4 out of 5 (Hubby's Rating: Worth Full Price of Admission)
**After you see the film or if you're not going to see it, check out this cool website called 208 Seconds. 208 seconds is the interval of time from takeoff to landing in the Hudson. Mind boggling!**
Posted by Gloria Oliver at 9:40 PM