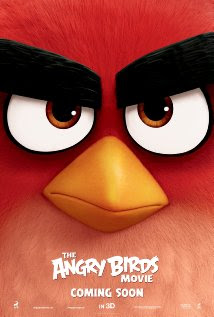 Starring: Jason Sudeikis, Josh Gad, Danny McBride, Maya Rudolph, Bill Hader, Peter Dinklage, Sean Penn, Keegan-Michael Key, Kate McKinnon, and more.
Directed by: Clay Kaytis and Fergal Reilly Written by: Jon Vitti Music by: Heitor Pereira Art Direction by: Pete Oswald
Premise: An orphan and with unusually large eyebrows, Red has always had a hard time fitting in, all the kids making fun of him because he's different. As an adult, things have not gotten easier, his streaks of bad luck not helping to keep him from getting angry.  Then the pigs arrive. Red tries to tell the village that there's something not right about them, but the smooth talking Leonard has a rebuttal for everything. Do the pigs have an ulterior motive for coming to the island or is Red just being paranoid? (Rated PG)
Review:
1) Acting - Total Thumbs Up: Jason Sudeikis does a great job as the pragmatic and unlucky Red. Josh Gad is a blast as super fast Chuck. Danny McBride did a nice job as the awkward Bomb. Peter Dinklage as the Might Eagle was hoot. :) Bill Hader had way too much fun as Leonard. Maya Rudolph added a lot cute bits as Matilda. Sean Penn doesn't say much, but his character Terence brought some definite fun to the table.
2) Artwork/Animation - Total Thumbs Up: Rovio Animation has taken the beloved little game of Angry Birds and made it into a fun film. The textures are nicely done, giving a different look and feel not only to make our feathered friends look fluffy, but even differentiating between the different feather types on their bodies. Nice work!
Bird Island and Piggy Island each have their own distinct look and feel. They even worked the loosey-goosey building style the pigs use in the different incarnations of the game on the pigs' city.
This loosey-goosey style is also extended to their technology, which makes for a lot of fun. That they haven't blown themselves up before this point is amazing! :P
If you go see it in 3D, they have several cute gags they use the 3D on for good effect. :) And Terence is awesome. Speaking volumes with but a look.
And they could not make the bird kids look any cuter! OMG! If they ever make plushies of the kids, I'm not going to be able to help myself. They are so CUTE!
3) Plot/Story - Thumbs Up: I have to give some definite praise to Jon Vitti for taking the premise of the Angry Birds game and actually building it out into a full plot for a movie. Thankfully animated films are expected to be 'fantasy' so that helped as well. Best not to look behind the curtain - as they say.
Red has anger issues, but he's come by them honestly. Though the island purports to only bring happiness, the adults tends to ignore things they don't like, and so poor Red was made fun of by his classmates for not knowing things and for looking different without anyone intervening on his behalf. Add his streaks of bad luck and I don't blame him for being angry. Several themes revolve around Red and friends - community, social blindness, suppressing feelings, individuality, and several others.
They make sure we know the birds in this universe do not fly - that only the Mighty Eagle can - and most think him but a myth. I found it quite amusing that the pigs are the ones who introduce them the idea of the slingshots. Their hubris was also their undoing.
Some of the characters and who they represent in the Angry Bird game universe are obvious, some less so. Half the fun is watching them do their thing. And the pigs are a riot! lol.
Make sure to stay through part of the credits. Super cute scene with the triplets. :)
Conclusion: The Angry Birds Movie is a must for anyone who has ever enjoyed the Angry bird games. Prepare yourself for large dozes of cuteness, some crude humor, and fun.
Rating: 3.75 out of 5 (Hubby's Rating: Worth Full Price of Admission)
Posted by Gloria Oliver at 9:05 PM