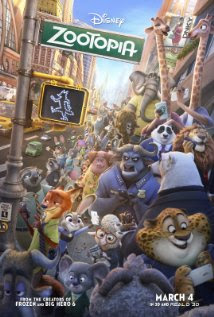 Starring: Ginnifer Goodwin, Jason Bateman, Idris Elba, Jenny Slate, Nate Torrence, Bonnie Hunt, Don Lake, Tommy Chong, J.K. Simmons, Alan Tudyk, Shakira, Della Saba, Maurice LeMarche, Raymond S. Persi, and many more.
Directed by: Byron Howard, Rich Moore, and Jared Bush Screenplay by: Jared Bush and Phil Johnston Story by: Byron Howard, Jared bush, Rich Moore, Phil Johnston, Jennifer Lee, Josie Trinidad, Jim Reardon, and Dan Fogelman Art Direction by: Matthias Lechner Music by: Michael Giacchino
Premise: Judy's dream since she was a little girl was to become a police officer. Everyone discouraged her, but she stubbornly clung to her dreams until she becomes the first bunny officer. Yet it's when she starts to work in District 1 that she realizes the obstacles to her dream are far from over. If anything, they've become greater than before. Putting her job on the line to prove herself, she must place her trust in on a hustling fox to track down a missing otter. Yet this is but the beginning of the mystery of something very wrong going on in Zootopia. (Rated PG)
Review:

1) Acting - Toal Thumbs Up: Ginnifer Goodwin was perfect for the role of Judy Hopps. Her voice oozed with the bounciness and the speed you'd expect from a rabbit. Jason Bateman was a lot of fun as the voice of Nick Wilde and made for a good foil to Ginnifer's Judy. Maurice LaMarche did wonderful work as Mr. Big. Loved Idris Elba's portrayal of Chief Bogo.  Jenny Slate was adorable as the ever suffering Bellwether. Raymond S. Persi as Flash was a hoot. And Alan Tudyk as the Duke Weaselton? Priceless. :P
2) Artwork/Animation - Total Thumbs Up: Walt Disney Animation Studios did a marvellous job with the film. The textures were amazing. The wool of Bellwether's hair, the fluffy bunny fur, the thicker fox hair, you could tell at a glance how they would feel and which would be softer or bouncier than another. As the credits and the film itself will show, they spent a ton of time on research for the plethora of animals represented in the film. The attention to detail was riveting.
Just as fascinating as the different species of animals were to see, the city of Zootopia was a wonder to behold. I especially adored the palm tree building made out of what looked like Tiffany crystal. All one has to do is look at how the city is split to realize the large range of species that live there. It even has weather zones! Each zone (and some areas were zones within zones) was entirely unique, with District 1, the hub of the city, looking eerily familiar.
Lots of little jokes in the details. Especially the neon signs scattered everywhere. This one will be a fun film to see with the DVD player, so you can stop and take your time catching all the cute background additions and fabulous vistas. Too fun!
3) Plot/Story - Total Thumbs Up: Though there is a lot to keep the younger kiddos entertained, this particular film's plot was geared more for the tweens and adults. Lots of delicious layers and themes were explored. Following your dreams, being held back, dreams destroyed and dreams found. Prejudice (from both sides of the predator and non-predator sides), assumptions, the fact actions have consequences - even when you're not aware of it, forgiveness, understanding, and the fact everyone has a part to play no matter their size or origins.
The mystery of the disappearances was fun and rather unique. Even as one facet of the mystery was solved, more answers remained to be found. There were several lovely twists. And just watching the society in general was a real treat.
4) Music - Total Thumbs Up: Not only is there a totally addicting song from Shakira, but there are several old favorites brought up for the soundtrack as well. Best of all are the BGM/OST tracks by Michael Giacchino as he gives each zone and the story itself some lovely, unique music.
Conclusion: Zootopia is visually and mentally fun! Gorgeous animation, likeable characters, and the complex story make this one a definite winner in my book!
Rating: 4 out of 5 (Hubby's Rating: Worth Full Price to See Again!)
Posted by Gloria Oliver at 9:12 PM