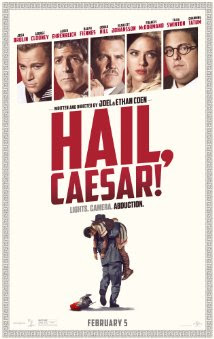 Premise: Eddie Mannix manages all that goes on at Capital Pictures. He makes sure things run smoothly. But when he has to juggle an unmarried pregnant starlet, a lucrative offer from Lockheed, threats from a gossip columnist and a journalist, plus the kidnapping of the main star of the biggest budget picture ever from the studio - Eddie may have finally reached his limit. (Rated PG-13)

1) Acting - Total Thumbs Up: Josh Brolin is fun to watch on this film. He embodies the look and feel of the 40's - a troubled soul with a calling. George Clooney really shows his skills as we see him flip back and forth between semi-brainless Baird Whitlock, bad actor, victim, good actor - he ran the gambit on this film! lol.

Alden Enrenreich was too much fun as Hobie Doyle, especially when he's trying to act! lol. (Wait till you see his roping skills! Dang!) Top performances from everyone involved. It's obvious they had way too much fun making this film. Channing Tatum dances AND sings! It was awesome! That sailor musical number was fantastic! (They even added some cool tricks I'd not seen done before. Fab!)

2) Special Effects - Total Thumbs Up: Chunks of the film are done 'old school' style. Here and there they show pieces of the films being made at Capital Pictures. And they have the same look and feel they would have had if they'd been made in the 40's. Even some of the reality took on the feel of a 40's film. :)

They also brought out some old but very familiar sound effects. One of them they had to have done just to do it, because otherwise it would not have been heard at all! Think Voyage to the Bottom of the Sea. You'll know when you hear it. :P

3) Plot/Story - Total Thumbs Up: It's going to be hard for me to quantify this film. In the true tradition of the 40's, the tale begins with a voice over and ends in one. And like several movies of the time, it ambles in a general direction but also has a lot of other pins tossed in the air, so you're never quite sure where everything is headed.

The film is a comedy but is also an encapsulation of the times as well as a giant homage machine. It has a TON of loosely veiled references to other films, studios, personalities, politics - there's a bit of that and more in there. And though I applaud them for doing it, I think it might also inadvertently hurt how the film does at the box office. I don't think anyone below the age of 40 will understand and get a lot of what is being presented and why so many bits are funny. I don't believe they'll have the knowledge needed to be able to put what they see in context. But I would be quite happy to be wrong about this! :)

The brothers touched on all sorts of things - the treatment of writers and other staff by the big studios, Howard Hughes (the mysterious backer of Capital Pictures perhaps?), the film Hell's Angels, the big musical's of the times, Roy Roger, Gene Kelly, religion, the scandal and gossip, communist accusations, the wrecking of careers (The Majestic is not only an awesome movie but it shares a ton of info on this controversial time in Hollywood, too!). A ton of scenes and locations of the films being made will seem familiar, poking at your memories.

Some neat duality was woven into the themes, which at times made certain moments truly ironic. Eddie struggles with the fact he lies to his wife about smoking and feels the need to confess and be absolved for this, but giving money to squash rumors, lying to keep from getting bad press, or keeping on the good side of the cops is just everyday life. The oppressed men who are part of "The Future" are raging at the system, but in the end, they willingly play the same role as before (even as they convince themselves they're free) - the working class toiling for those above them, and getting next to nothing for their efforts.

The film is also a view behind the curtain. The audience normally only sees the finished product, the dream as it was envisioned. But this film loves to set the audience to get caught in films being made then yanks the curtain open, forcibly pulling us from the fabrication back to their reality.

4) Locations/Cinematography - Total Thumbs Up: The cinematography was great. From the too close overdone filming to spanning vistas, it was all embroiled with new and old techniques. They even throw in cheesy stuff that for the times would have been top of the line tech. Nice!

5) Costuming/Makeup - Total Thumbs Up: The costuming and makeup department did a phenomenal job. Not only did they bring out the fashions for the time, but also made the actors and actresses look like top stars of the 40's and recreated costumes that would look close to those actually used in the films.

Conclusion: "Hail, Caesar!" is a fun film full of all things Hollywood in the early 40's, making it a time capsule of sorts. Top performances by everyone. Younger viewers may not enjoy it as much, though the musical bar scene and Hobie's horseriding and lasso handling are totally worth seeing.