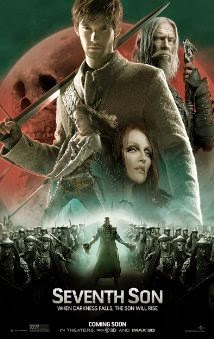 Premise: An evil locked away for decades underground escapes. The man who first imprisoned Mother Malkin, the Spook John Gregory, tries to capture her again, only to find her power has increased to the point the old methods will no longer work. Losing his apprentice, John finds another seventh son of a seventh son, except he's not exactly what he should be. But with the full red moon less than a week away and Mother Malkin's power reaching new peaks, Gregory has little choice but to work with what's available. (Rated PG-13)

1) Acting - Total Thumbs Up: Jeff Bridges was fun as the somewhat drunk and embittered Spook, John Gregory. Ben Barnes as Tom Ward oozed honesty and a very curious nature and doing things his own way. Alicia Vikander as the capable Alice was interesting to watch as her character dealt with conflicts with regards to family and love.

2) Special Effects - Total Thumbs Up: Some truly outstanding work from the special effects department. The beginning sequence combining CGI and time lapse photography spoke volumes without anyone having to explain anything - and looked fabulous!

The morphing sequences for all the witches were incredibly smooth. The sabertooth cheetah made me purr. All the fantasy creatures were great. And when Mother Malkin brings her main rooms and sister back to their prime - lovely work!

My favorite special effect, however, was the ghasts in the forest. There's a scene where one bops around Tom that looked so good it gave me chills. Ben Barnes really sold the particular scene as well.

3) Plot/Story - Thumbs Up: I've not read the series, so can't compare it to the books. It's also listed as 'inspired by' rather than 'based on', so I'm thinking a lot may have changed from the original. Something for fans of the series might want to keep in mind.

The plot is somewhat standard and passable as long as you don't look too closely.

Five days of training, most of which are taken up with traveling, does not much of a warrior make. It plot also suffered from too many cool bad guys. Mother Malkin has five top warriors, but while they all look quite interesting, there's too many of them vying for attention and not enough time for them to really strut their stuff, let alone to get the audience to know them. Sadly, this also left no time for Mother Malkin to be developed much either, except that she's a queen, has more power than before, and is evil.

One strangely amusing bit is Mother Malkin refusing the gift of several assassins from her vassal Radu. He states they are some of his best men. But Mother Malkin didn't find them all that good. Later in the film, they prove she's right! Lol! It was very odd.... Would have been nice to learn how Gregory and Tusk became friends, especially since Gregory appeared the type to kill first ask questions later. :P

4) Stunts - Total Thumbs Up: Jeff Bridges stunt double got to do a lot of work! Lots of people got thrown about. Some swordplay and lizard munching, though again too many things too see too fast to get too impressed over anyone.

5) Locations/Cinematography - Total Thumbs Up: The locations for the film were great. Just the place they picked for Mother Malkin's original incarceration was fabulous. Add in the fog enshrouded mountains, the walled city with an Arabian flare, and the mountain retreat with Asian influences, and there was plenty of fodder for the eyes.

6) Music - Total Thumbs Up: I've been seeing Marco Beltrami's name a lot lately. He's been doing some really nice work to boot! Just like the locations seemed to have a bit of Asian and Arabic influence, the soundtrack does as well. Some nice creepy undertones here and there, too, like where werewolves or vampires prey music. There are samples at Mr. Beltrami's site, but no movie soundtrack forthcoming that I could find. :(

Conclusion: Seventh Son is a nice fantasy romp as long as you don't look too deeply. Great special effects and the lovely soundtrack add a lot to enhance the experience.

Posted by Gloria Oliver at 9:40 PM