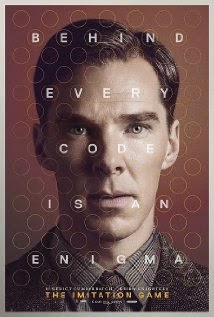 Directed by: Morten Tyldum Screenplay by: Graham Moore Based on the Book by: Andrew Hodges Cinematography by: Oscar Faura Music by: Alexandre Desplat

Premise: A detective becomes interested in a robbery in 1951 after meeting the victim, Alan Turing. The detective feels the victim is hiding something and decides to dig deeper. Flashing back to 1939, we see Alan Turing at his work and trials on creating a machine able to decode Germany's unbreakable Enigma machine. (Rated PG-13)

1) Acting - Total Thumbs Up: Benedict Cumberbatch shines in his portrayal of the mathematical and code breaking prodigy Alan Turing. He does a fantastic job getting across Turing's social confusion and other feelings as he takes on the job to break Enigma's naval code. His bumbling attempts at levity, or making inadvertent jokes, will strangely endear all those watching to the mathematician - one of Cumberbatch's incredible abilities.

Keira Knightley also shone as Joan Clarke, a capable woman pigeon holed by society and her parents not to amount to anything despite her amazing talents. It was great seeing Allen Leech again and the surprises he brings with him as well. Great job from all the cast members.

2) Special Effects - Total Thumbs Up: While not a flashy special effects type of film, the Christopher/Ultra/Bombe machine seen at its various states of construction was fascinating and was kept within the technologies available at the time, even as it made some leaps forward. The audience will be as excited as the actors when those circles begin to spin, and later when they stop!

3) Plot/Story - Total Thumbs Up: The story grabs the audience almost immediately - beginning in 1951 and showing Alan Turing in an interrogation room. The mathematician begins speaking to the audience, giving several rules, and how he will not repeat himself, so all must listen carefully.

It is after we're told of a burglary at Turing's and Nock's suspicion that Turing is hiding something that propels the story back to 1939.

The rest of the tale is told with small leaps back to Turing's youth at school, and the investigation in 1951 as matters progress in 1939. So you get to know the man and how he became to be as he was. There's a phrase used several times, which proves to be a turning point for many people.

While most matters proceed as you'd expect, lots of lovely curve balls show up throughout the story. You'll also be happy to know that Joan Clarke was not a token female, but was an actual member of the team, brought slowly forth into the group as Turing and the others pushed for her to help with the work.

There's a lot having to do with the Enigma machines and different encryption levels used by the different branches of the German military that don't get disclosed, but was not really needed as it kept the information more focused. But it was specifically the naval's super high encryption and water soluble code books that caused the most trouble for decoding their encryption, especially at the short time frames before the codes were changed. Truly a mind boggling problem.

The ending both in the 40's and 50's truly brings home the sacrifice, service, and sadness of all those who worked during that time - so I would advice taking some tissues.

4) Locations/Cinematography - Total Thumbs Up: A lot of the filming happened at actual historical locations - Bletchley Park, Sherborne School, London, King's Cross Station and more. The sequence with the crossword puzzle really brings home some of what the regular population was going through during those trying times.

5) Costuming/Makeup - Total Thumbs Up: Running a span of thirty or so years, great care was taken with the costuming and hairstyles. Several times, when they would switch years, the costumes alone were enough to ground you into the proper time location.

Conclusion: The Imitation Game is a fascinating look at the man and the struggle to beat the Enigma naval codes used by the Germans during World War II. The superb cast and cross pollination storytelling made it an incredibly fascinating watch.