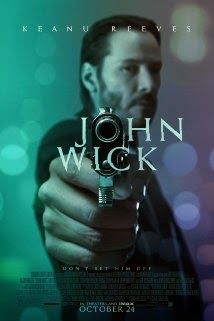 Premise: John lost his wife to a disease, and though they'd know the end would come eventually, he's still not prepared for it when it comes. His wife, knowing he would need an emotional anchor, ordered a beagle puppy to delivered after her funeral. Trying to deal with this new wrinkle, he's approached by a man at a gas station who wants to buy his car. He tells him 'no' and they part ways. But that night, they assault him in his home, kill his new dog, and steal his car. But there's something they don't know about John Wick - John is a retired assassin. And for their disrespect, someone will pay. (Rated R)

1)  Acting - Total Thumbs Up: Keanu as John Wick was an excellent choice - from wounded husband to avenging angel, you never doubt what's on his mind. Michael Nyqvist as Viggo Tarasov was another marvellous choice - a man who knows the choices he makes may very will be the end of everything, but does them anyway.

A master stroke was getting Adrianne Palicki to play Ms. Perkins - she was all sorts of delicious goodness in the film. (Supernatural fans - meet a new and deadly Jess. She's also been making waves in this season's Agents of Shield! Scrumptious!) Aldie Allen does what he does best as the mob boss's son Iosef. Lance Reddick was fab as the Hotel Manager! Best straight face in the business!

And one who would not normally get credit - the beagle puppy, Daisy. Most adorable thing EVER!

2) Special Effects - Total Thumbs Up: As the previews imply, there is a boat load of gun play and destruction. People shot in all manner of ways with minor splatters of blood all over the place. Great work all around.

3) Plot/Story - Total Thumbs Up: The premise for the film is simple and could have easily been glossed over and just used as an excuse for the mayhem. Films of this type normally go in that direction, not really bothering to get the audience invested. But not this one. These guys sell you into it. They let you see John's pain and grief and the glimmer of possible hope brought to him by his dead wife in the form of a puppy. And they were smart enough to get the most evilly adorable creature imaginable. So the audience is right there with him when things take an unexpected turn and you want them to pay for what they've done as bad as John. Super kudos on how they played this!

If that wasn't enough to amaze, they used the right reason to support why these mobsters didn't hand the offender over on a silver platter, the idiot is the boss's son. His only son. Half the fun of this thing is watching each rung of men realize who it is that the idiot Iosef picked on and how he may have just signed a death warrant on them all. Heh heh.

Lots of small reveals about John and who it is he's coming after and how this is one giant cosmic joke or a case of karmic vengeance. And John Wick is wickedly efficient. He very much believes in the 'double tap' principle. Totally awesome. And they had to reload! Yes! They even had a competent head of security to slow John down - the guy was awesome.

And then they give you more. John goes back into a world known to only to a select few. A world with rules and stringent codes of conduct. Things you do and things you don't. It added another fabulous layer to the entire enterprise. And Ms. Perkins - so loved the character of Ms. Perkins. lol.

Also, after you've seen the film, think about John's reputation, and then who it was that helped him. I got the definite impression this was not the first time this game was played. Priceless.

4) Stunts - Total Thumbs Up: The stunts were phenomenal. Tons of hand to hand combat, close range shooting, speed driving, all the fun stuff of which action movies are made. And they did it phenomenally - several scenes almost seeming like a ballet at times due to the awesome timing and smoothness of the choreography of those involved.

5) Locations/Cinematography - Total Thumbs Up: Great locations for all sorts of mood setting spots: the Red Circle with the club within a club, the hotel combining old and new and its own unique clientele. And the cinematography showed every one of them in lovely detail. Then showed them as chaos came to rule. Visually stimulating.

Conclusion: "John Wick" was an action packed paradise with a solid story raising it that much higher above the fold. Definitely a fun ride all around. Subject matter might be a little too strong for younger kids.