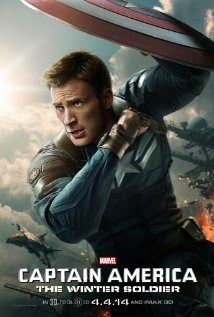 Directed by: Anthony and Joe Russo Screenplay by: Christopher Markus and Stephen McFeely Concept and Story by: Ed Brubaker Based on the Comics by: Joe Simon and Jack Kirby Cinematography by: Trent Opaloch Music by: Henry Jackman

Premise: Still trying to acclimatize himself to the 21st century, Steve Rogers struggles to find his place and purpose in the world as SHIELD's methods don't quite fit with his own ideals on freedom and how to protect it. But when Director Fury shows up at his home wounded and with killers on his trail, Steve finds out that some things in the modern world aren't all that different from the one during World War II. (Rated PG-13)

1) Acting - Total Thumbs Up: New and familiar faces grace the cast. Chris Evans, Samuel L. Jackson, and Scarlett Johansson reprise their roles as Captain America, Nick Fury, and Black Widow. Some nice dynamics develop between these three characters which made them a lot of fun to watch, especially as these dynamics are sorely tested. Robert Redford was in top form as Alexander Pierce - great to have him back acting in films. Sebastian Stan could not have been more cool.

2)  Special Effects - Total Thumbs Up: Lots of explosions, gadgets, virtual HUDs, and other lovely special effects. Falcon's wings totally rocked. They even got creative with the uses of Cap's shield. The look and feel of the Winter Soldier's metallic arm was excellent.

3) Plot/Story - Total Thumbs Up: I was quite happy when I saw the same script writers for "Captain America: The First Avenger" worked on this film as well. Out of the whole franchise of Marvel heroes, that film is still my overall favorite. But though it may not have topped itself, "Captain America: The Winter Soldier" is definitely up there on my list.

If you haven't yet watched the "Agents of S.H.I.E.L.D." episode that aired on 4/8/14 called "Turn, Turn, Turn" - you should wait and not watch it until AFTER you've seen "Captain America: The Winter Soldier." There are spoilers in there which will give the big plot complication away.

Lots of surprises are hidden in the film, and they range from small to world changing. The film is filled with many cute moments as well - Black Widow playing matchmaker, Sam Wilson's and Steve Rogers's literal 'running' joke, and more.

Several themes are explored and from a number of levels - trust, loyalty, family, right and wrong. Paying your dues. What was fun about these was the fact they didn't always have something to do with the good guys.

4) Stunts - Total Thumbs Up: There are stunts, stunts, and more fun stunts in this film. All the combat sequences are excellently executed with and without CGI. The hand-to-hand combat was awesome to behold. Combined with the special effects and explosions, the 'gags' are totally riveting and keep you 'on the edge of your seat'.

5) Locations/Cinematography - Total Thumbs Up: Filming in Washington DC as well as different parts of Cleveland, OH and elsewhere, all the locations added the right look and feel for the film. Then they took these real locations, added some creative CGI backgrounds, buildings, and giant, floating ships, and you're served a sumptuous visual feast.

Conclusion: "Captain America: The Winter Soldier" is a lot of fun to watch. Darker than the first film, it is also in its own way a commentary on simpler times that really weren't so simple. Great combat scenes and special effects. Make sure to sit through the credits ALL the way to the end - there are two extra bits tucked in there.