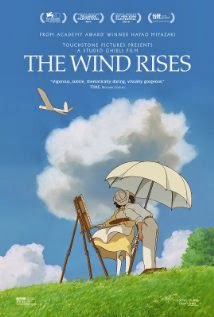 Premise: As a boy, Jiro always dreamed of planes and flying. But Jiro is nearsighted and will never fly. Yet in his dreams, Giovanni Caproni, the famous Italian aeronautical engineer, encourages him not to worry about flying, and instead to ride the wind and create beautiful flying machines instead. Having found his calling, Jiro strives toward his goal while also living through several major moments in Japan's history. He even finds love along the way.  (Rated PG-13)

Review:
(This review is of the dubbed version of the film. Depending on your area, you can find "The Wind Rises" playing in the original Japanese with subtitles at the local art theaters.)

1) Acting - Total Thumbs Up: Walt Disney picked a great cast for the dubbed version of the Studio Ghibli film. Joseph Gordon-Levitt was very convincing as the voice of Jiro Horikoshi, very reserved yet deeply passionate in both his dreams and his goals. Emily Blunt brought some nice depth to Jiro's love Nahoko. By far, however, the character that will make the most impact is Mr. Kurokawa, played by Martin Short. Between the visuals of the man and Martin Short's portrayal of Jiro's boss, the character was a lot of fun.

2) Artwork/Animation - Total Thumbs Up: Studio Ghibli was in top form with this film. With Miyazaki directing it, it couldn't be otherwise. Strangely though, the longer the film went, the more beautiful it became. The characters themselves are in Miyazaki's signature style. The watercolor backdrops were gorgeous. The rooms, clothing, and machinery were all rendered in amazing detail.

Where the animation truly shines is in the sequences where reality and fantasy merge. As we head toward the climax it isn't the dream anymore showing the world, but the world being swept up by the dreams. As the film's title denotes, wind plays a metaphorical and physical part in events. The theme of wind even stems from the early days of Japan when a 'divine wind' saved the Japanese people from the invading fleets of Mongols. More ironic is the fact that the 'divine winds' or 'kamikaze' also played a part with the very planes Horikoshi developed for the Japanese navy.

3) Plot/Story - Total Thumbs Up: While this is a heavily fictionalized biography of the life of Jiro Horikoshi, Miyazaki imbued it with a lot of passion. It's also a great way to experience the lives of the Japanese during the years between World War I and World War II.

Miyazaki incorporated subtle touches of Japanese mythology into the work as well. The Great Kanto Earthquake and several other moments in the film had what can only be described as the sounds of the spirits which inhibit the land of Japan. These sounds added an extra layer to the world, and made it all the richer for it.

"The Wind Rises" is an adult film, one that builds over time, so there won't be much there for the younger viewers. The guys will love all the planes (Italian, German, and Japanese) as well as the engineering, while the gals will enjoy the beautiful vistas as well as the love story woven around it. (I heavily encourage taking tissues to this one.)

There are a lot of themes in the film, many of which are quite subtle - sacrifice, invention, looking to the future, living in the moment, the power of dreams.

Conclusion: "The Wind Rises" is another great film by Studio Ghibli and Hayao Miyazaki. Beautiful and intriguing, it is a film for adults rather than children. The film is rather sedentary, so don't expect a lot of action. But definitely bring some tissues...just in case.