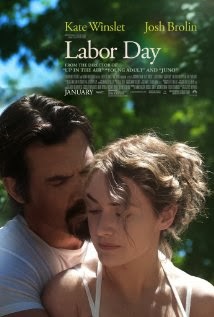 Premise: Over the long Labor Day weekend in 1987, Henry and his reclusive mother end up with a uninvited guest, an escaped convict. With secrets being hidden on all sides, this unexpected visitor might turn out to be exactly what they've needed all along. (Rated PG-13)

1) Acting - Total Thumbs Up: Kate Winslet was totally convincing as Adele. Just seeing her for the first time, it was obvious Adele constantly fought battles with herself to try to remain at least partially functional for her son. Josh Brolin as the mysterious Frank also did a superb job - looming one moment, unusually tender the next, then threatening again. Kate Winslet and Josh Brolin had good chemistry. It was fun watching them start to feel for one another even as they fought the unexpected urges. Watching Gattlin Griffith watching them was a treat. His large expressive eyes will get him far. His narratives added an unexpectedly great flavor to the story as a whole.

2)  Plot/Story - Thumbs Up: The film starts as we leisurely travel down a two lane blacktop road. The music is soft. All the views are things you might see while traveling one lane blacktop roads in New England. Put together it generates a laid back mood, like being in a hammock during a soft afternoon. And for the most part, the whole film moves in the same way throughout.

The point of view for the film mostly comes from Henry, with some disjointed tiny flashbacks thrown in about Frank's story here and there, as well as a reveal from Adele of what truly brought her to have the secluded life she leads. But because the film is mainly focused on Henry, the romance element is never heavy.

There are lots of cute, quirky moments, many coming from Eleanor, whose pessimistic wisdom get's Henry into trouble a couple of times.

3) Locations/Cinematography - Total Thumbs Up: The story takes place in a lovely New England town cobbled together from multiple locations in Massachusetts. The shots are often idyllic and filled with feeling. Yet it is Adele's home that is center stage for most of the tale. Just looking at the facade of the house instantly gave the audience a ton of information on the status of those living within. The same view is used several times to impart changes in Adele's situation as time flows by.

Conclusion: No gun fights, no real violence, just lots of interesting people you want to know better. Some cute, tender, and even funny moments are sprinkled through the film. "Labor Day" is what you expect, yet at the same time it's not. Your heartstrings will be tugged at the end, no matter how hard you try not to let them.

And because I gotta - My urban fantasy novel "Inner Demons" has been released! Trade paperback and multiple ebook formats abound (Nook, Kindle, pdf, and more). Paperback are currently only available at the publisher's website but should come down and be available at the usual the channels soon! Huzzah!