Movie Review - The Hobbit: The Desolation of Smaug

The Hobbit: The Desolation of Smaug 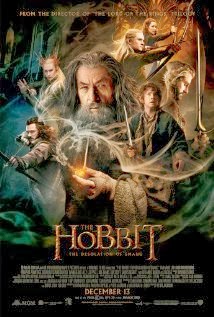 Premise: Still pursued by orcs, the company of dwarves, Gandalf, and Bilbo continue towards the old mountain kingdom. As Bilbo learns about the ancient feud between the elves and the dwarves, and they run into more trouble, he also begins to grasp that there's something not quite right with the ring he took from the orc caves. Gandalf, too, comes to realize that an ancient evil is once more loose upon the world. And none of them have yet figured out how they plan to deal with the dragon. (Rated PG -13)

1) Acting - Total Thumbs Up: Martin Freeman more than amply proves again why he was the perfect choice to play Bilbo Baggins. Though his part in the second film is not quite as extensive as in the first, he still brings so much to the film as to be invaluable. Freeman even has several comedic moments were just a few gestures totally made the scene. Evangeline Lilly, Orlando Bloom, and Lee Pace were great additions to the cast. Lee Pace gave the High Elf Thranduil a wonderful edge, as if the character were swaying back and forth between possible madness.

2) Special Effects - Total Thumbs Up: There are a ton of special effects, and just about all of them looked fabulous. I loved the interpretation of Mirkwood forest. The creepy, almost rotting inside later contrasted nicely with the gorgeous top of the canopy. The way they show trouble is coming while he was up there was quite clever. The flip sides of the forest, very much hint of the very things which are happening within the underground palace of the elves. The combat sequences with the CGI orcs and the actors were fantastic. You'd hardly believe they weren't really there. You'll also see a barrel used as a deadly weapon - fabulous.

There is a neat magic bout literally between light and dark, and the film bled all color away, which was a nice touch which showed the two extremes colliding. The CGI work on Smaug was awesome - add in Benedict Cumberbatch's voice - and one could not ask for better. Make sure to look at the dwarves' hands. Not sure how they did it, but they're different enough from a normal human hand to really help the audience believe Thorin's band are indeed a different race from the norm.

3) Plot/Story - Total Thumbs Up: I'll warn you now, you'll grit your teeth at where they leave off the film. But at least they do give you a fun, fabulous ride before yanking it on you. The pace is fast, so the two hours and forty minutes fly by. Some tweaking to the original story by adding elements not in the book, but in general it seemed to stick to it pretty faithfully. Definitely felt better put together than the first film.

4) Stunts - Total Thumbs Up: Lots of closeup battle scenes between elves, orcs, dwarves, giant spiders, and one hobbit. A ton of great moments during the fights, too. It's almost a contest to see who can kill whom in the most surprising manner. However they worked the stand-ins for the CGI orcs and other creatures to battle the others, it was an amazing job.

5) Locations/Cinematography - Total Thumbs Up: There were a lot of new and fantastical places to see in this second film. The cinematography did a great job in letting us get a look at them, and sometimes doing so from unexpected directions, which let us get even more out of the view. The shot from the top of the tree canopy in Mirkwood is absolutely breathtaking. The elven grounds, the palace under the mountain, the hideout of the orcs, even the sad human town, all perfect set locations.

Conclusion: "The Hobbit: The Desolation of Smaug" is fast paced and a ton of fun. They leave you hanging at a bad spot, so reconcile yourself to this before going to see it. Sadly, there were no previews or extra items in the credits. But if you have time, I definitely recommend going to the main site and then clicking on the web experiment. Fun stuff.