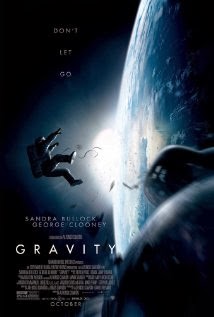 Premise: Debris from an exploded satellite sets off an unexpected chain reaction which send hundreds of pieces of metal hurtling straight at American astronauts testing equipment in orbit . The ensuing accident places the survivors on a course to try to save themselves as their air supply and other resources dwindle quickly towards zero. (Rated PG-13)

1) Acting - Total Thumbs Up: George Clooney played Matt Kowalski, an astronaut on his last mission playing it easy and fun until things get ugly and then doing whatever it takes to try to bring those in his charge home again. Mr. Clooney nicely showed the audience Kowalski's fun and somber sides as the plot developed.

Sandra Bullock did a great job as Ryan Stone, scientist turned astronaut, running from the great sadness in her life. She carries the film along easily and it's all the little nuances she brings forth in her character as we go with her on this journey that makes everything feel real.

Great job too by the rest of the cast, though we never see them, only hear them. Yet they added a lot to the film, helping to 'sell' the setting and the other events going on.


2) Special Effects - Total Thumbs Up: The effects in this film were fantastic. And when coupled with the great skill of the cinematographer, it pushed the film to dizzying heights. "Gravity" must be seen in IMAX 3D to get the true grandeur of the work done for this film.

The models of the different spacecraft, both inside and out, were very well done. The floating bits of flame inside the International Space Station and their treatment of Stone's tears looked great. And wait until you see the giant speeding debris field!

3) Plot/Story - Thumbs Up: The previews for this film clearly stated that the characters are about to have a very bad day. And they definitely have that. Slowly working up at the beginning, once the astronauts hear about the debris coming their way the plot moves fast and hardly slows down until the end. It's even split up into pieces, for faster processing, as those involved try to take it one goal at a time.

A lot of previously used plot bits are part of the script - the astronaut (cop) on his last mission before retirement, the deep emotional scar repressing the scientist from living a full life. But the execution is so good, you barely notice them.

The science looked to be pretty much on target, except for a couple of glaring spots. One of them is a rather significant scene, so the reworking of the effects of motion in space took a little bit away from the rather poignant moment. I really wish they could have figured a way to get the same result without having to cheat to get it. But if you can ignore than one spot, you won't have any troubles enjoying this one.

4) Stunts - Total Thumbs Up: While some of the stunt work was definitely CGI created, a lot of the 'gags' looked to be real. The bungee cord effect on the people in several scenes looked rather painful. The same can be said about their arrival at the ISS. A 'making of' featurette for the DVD would be of tremendous interest.

5) Locations/Cinematography - Total Thumbs Up: The visuals in this film were just "WOW". Earth is shown in all her glory passing below as a backdrop to the drama orbiting about her. The spanning views of the planet's surface during day and night as well as the super lovely sunrise will stick with me for a long time.

The point of view of the cameras changed a lot during the film, but it helped make the whole experience more immersive and personal. One nice composite shot creates a replica of an embryo in the womb.

Conclusion: "Gravity" is a must see film and in IMAX 3D if at all possible. The visuals alone are worth it. Yet the puzzle on how the heck Stone might come out of this alive definitely will keep you 'on the edge of your seats'.