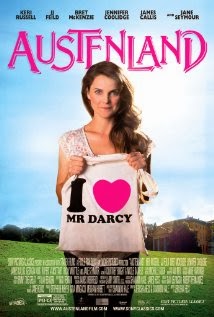 Premise: Obsessed with all things 'Jane Austin' and so far having little luck with love, Jane Hayes takes a risk and spends all of her savings on a trip to Austenland - a Regency Era themed getaway. Yet from the moment she arrives, matters don't exactly go in the direction she'd hoped. (Rated PG-13)

1) Acting - Total Thumbs Up: Keri Russell is just too adorable. You feel her excitement as she finally ventures to her dreamland, but also feel her rising disenchantment for what she's been inadvertently thrust into. JJ Feild as Mr. Nobley and inadvertent recreation of Mr. Darcy was a lot of fun to watch. Especially as his awareness of Jane grows, as her true persona begins to seep through the cracks. Jennifer Coolidge played being sweet, clueless, and driven with her usual aplomb. Most of the comedic moments come from her character's utter cluelessness of things English. James Callis playing the actor playing Colonel Andrews at "Austenland" was so very good at being bad.

2) Plot/Story - Total Thumbs Up: Most times we don't expect much from romantic comedies, so it was a nice surprise to actually have a couple of unexpected twists in the plot on this one. Even more fun were the layered issues in the film, most of which mirrored the same themes Jane Austen used in her famous novels.

While being even minimally acquainted with Austen or her novels is not a requirement to enjoy the film, I believe those who have at least some degree of knowledge in the area will get more joy out of "Austenland" than those who don't. Seeing all the correlations with Austen's works in the plot will increase the depth of entire story for them. There are many themes in the film which get used in her books - hypocrisy, judging others merely on what is seen on the surface, the strict roles expected of men and women, how those with money and influence are perceived as better than others, how perception is everything, and a few more.

For those who don't know Austen but know things about the British, there'll be plenty of jokes for them to be amused by. Most notably will be the character of Miss Charming, who uses accents of the lower classes and butchers standard British phrases while pretending to be a Regency Era rich socialite.

3) Locations/Cinematography - Total Thumbs Up: From the obsessive fan's bedroom to the gorgeous lands of West Wycombe, great attention to detail and mood went into the setup of locations and spanning shots. West Wycombe was a great place for conveying the look and feel of the Regency Era.

Even the sets for the mock play screamed of authenticity. It made a great backdrop to the fantasy versus the reality being played by those visiting there. There was also a lovely and telling contrast when we're shown the area where the actors and others who work at Austenland go to seek a little respite from being in 'character'.

4) Costuming/Makeup - Total Thumbs Up: The costuming department did an excellent job outfitting everyone with their different costumes, even the markedly different wear and hairstyles depending on your class and status. Intentional or not, I found much humor in Jane's first hairstyle and dress as it made her look a lot like a younger Sarah O'Brien from "Downton Abbey". Mr. Nobley was made for the wearing of Regency Era men's attire.

Conclusion: "Austenland" was a definite treat. The more knowledge on Britain or Jane Austen you have, the more you will enjoy the film. Make sure to stay through the end credits as there's a bonus bit for the audience that was a lot of fun. (And an interesting tidbit - Stephenie Meyer (author of Twilight) was a producer for the film.)