Movie Review - Now You See Me

Now You See Me 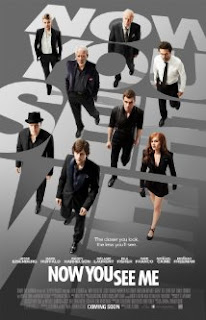 Premise: Four magicians receive a mysterious summon. A year later, they put on a huge show in Las Vegas and seemingly rob a bank in Paris with magic. The FBI and Interpol get involved, wanting to make sure to stop whatever the group is up to, though they have no evidence yet to make an arrest. (Rated  PG-13)

1) Acting - Total Thumbs Up: Mark Ruffalo was fun as the befuddled and out of his depth FBI agent, whom, despite himself, might just start believing in something. Mélanie Laurent will make you want to believe. Woody Harrelson added a lot witty humor. Michael Caine and Morgan Freeman were awesome when going at each other and when working together.

2) Special Effects - Thumbs Up: This may sound weird, but there were a couple of places where I wished the special effects team had figured out how to make a piece of illusion or two with real components rather than CGI. The fact CGI was used stole, in my opinion, from the premise of what the film was about. When the group was on the stage and the sheets twirled up and around, it was too obvious they were CGI, so it took away from feeling of the show being an actual stage performance.

But aside from that, the special effects were very well done! The final trick and light display over the building looked great.

3) Plot/Story - Thumbs Up: From the beginning the audience knows there's a fifth person. Even the symbol for the Four Horsemen is made of five squares. So half the fun of the film is trying to figure out who's behind it all. Clues for motivation are sprinkled throughout, but beware the false leads.

The part of the plot which most impressed me, however were the understated subplots. Several were running concurrently, but one especially means so much more than we initially realize until the end. Even magicians can be surprised by other types of magic. It was fabulous! Yet it's also so understated, it could easily be missed. But I felt it added a lot. And the same concept was done in a couple of ways to more than one person. So that was fun too.

4) Stunts - Total Thumbs Up: Some great 'gags' are in this film - a super fun fight in an apartment, big car chase through downtown New York, foot chase in New Orleans, escapes, explosions, and more. You'll also see the most bizarre, yet useful use of a kitchen sink grinder...ever.

5) Locations/Cinematography - Total Thumbs Up:  "Now You See Me" used some great filming locations in Las Vegas, New Orleans, New York City, and Paris. With the large scope of some of the action and tricks, the cinematography showed it all from different angles and panning back enough to show the audience the whole scene. It was used especially well at the site of the third trick, giving the audience an amazing view of the moving art being flashed on the buildings.

Conclusion: "Now You See Me" is a fun ride. Between the magic, the great acting, and the mystery of what set all these things in motion, viewers will have lots to keep them occupied. Plenty of old tricks and new, and the more they show you, the more they reveal while giving nothing away.