Movie Review - From Up On Poppy Hill

From Up On Poppy Hill 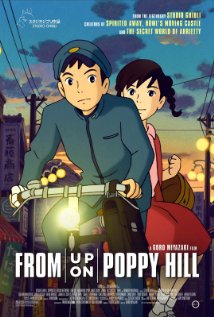 Premise: Yokohama 1963 - The 1964 Tokyo Olympics looms in the horizon and Japan is in a mood for change. But to Umi Matsuzaki, change is the last thing she wants. And to her surprise, she finds out she's not the only one who feels this way. The boys using the Latin Quarters as a clubhouse want to save the structure from the wrecking ball and progress. Yet all their efforts seem in vain, until Umi gets dragged into the issue despite herself and gives Shun Kazama an idea that might just work to save it. (Rated PG)

1) Voice Acting - Total Thumbs Up: Sarah Bolger and Anton Yelchin are utterly adorable as the voices for the very private Umi and Shun. Everyone else added great dimensions to the wide variety of characters in the film. Nicely done!

2) Artwork/Animation - Total Thumbs Up: Ghibli Studios never disappoints. Their unique style and gorgeous painted backdrops are always a delight to look upon. Their attention to detail is incredible. The audience will feel transported back in time to Japan during 1963.

There were a couple of hiccups that surprised me - less variation in the faces, and definitely in the hairstyles - so much so I got confused as to who was who a few times. There was also a scene where four sailors were waving at the kids, and the smaller version of the two sets of men, was an exact copy of the larger group and the arms moved in sync. Hopefully that's just an accident and not a sign of things to come.

On the other hand, the gorgeous waves, the sky shots, the city/street views, and the amazing sequence when they relayed the ship explosion late in the film, easily overshadowed these rare flaws.

3) Plot/Story - Thumbs Up: Though animated, this story is not for young kids. It's a coming of age adult tale about the twists and turns in the lives of Umi and Shun as well as their classmates. Unlike a lot of the other Studio Ghibli films, there isn't any magic or cute creatures to appeal to the younger kids. Fifteen year olds and higher will understand more of what's going on and be interested in where the plot and budding romance is going, but much younger than that and they probably won't enjoy it.

Several themes run through the film - the past and why it should be respected, the fact change is inevitable but that it doesn't always make it right, sometimes it's good to look toward the future, and how a small idea can create a giant spark in others.

One of my husband's favorite parts of the film (to my amazement, he enjoyed the movie even more than I did) was how a certain situation actually allowed the characters to speak of things they would have fought a lot longer before revealing them to one another. Funny how things work sometimes.

Conclusion: Another fun film from Studio Ghibli, but one that won't be appreciated by the younger kids. A great look at Japan in the 60's and what those with a will can accomplish.

Rating: 4 out of 5 (Hubby's Rating: Worth Paying Full Price To See It Again. He really, really liked it!)
Posted by Gloria Oliver at 10:25 PM