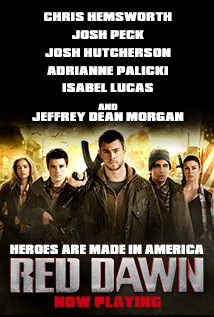 Directed by: Dan Bradley Screenplay by: Carl Ellsworth and Jeremy Passmore Based on the 1984 film "Red Dawn" Original Music by: Ramin Djawadi Cinematography by: Mitchell Amudsen

Premise: While home on leave, Jed Eckert witnesses the crippling of his hometown by a massive blackout. The next morning, he wakes to find it being invaded by North Koreans. Banding together an unlikely set of fighters, Jed decides the invaders will not be taking over his home without a fight. (Rated PG-13)

1) Acting - Thumbs Up: Chris Hemsworth and Josh Peck did a good job showing the audience their family's strained relations without ever actually talking much about it. Josh Hutcherson showed his usual flare.  Connor Cruise had several poignant moments and he carried them off beautifully.

2) Special Effects - Total Thumbs Up: Bullets flew everywhere and there were explosions galore. The scene when Jed and Matt look up into the sky and see the invaders dropping down was quite affecting and well done. Sadly, some of the efforts of the special effects department were diluted or downright sabotaged by the use of shaky cam on several of the scenes.

3) Plot/Story - Neutral: I'll be honest, I didn't pick to see "Red Dawn" because I expected it to have depth or a convoluted plot. And it was a good thing I didn't. This film is best watched without thinking too hard. As difficult as the premise was to believe in 1984, it is ten times more so in 2012. With the amount of technology now at our disposal, a campaign of this magnitude could not have been arranged without word getting out. A secret pulse weapon is mentioned purely to set up the premise and nothing more is learned about it at all.

I saw the original back in the day, but don't remember much. My husband said the remake followed most of the main points of the original. The brothers are at odds due to the death of a loved one years before, and their issues clash during different parts of the film, but eventually they reach some resolution.

Sadly one of the more satisfying moments in the film was marred by the fact the item and location hadn't been shown previously, so ended up being a point of bad story telling. Still, they did try to give some quick filler to substantiate their survival, so some things were well thought out. Killing didn't come naturally to all of them and the hard decisions some had to make were hard, and the audience was able to see that.

4) Stunts - Thumbs Up: With bullets and explosions, we always get stunts. The gags were solid and worked well, except those that were made blurry by shaky cam. Still, enough flying bodies and some hand-to-hand fights were present to fulfill our action quota.

5) Locations/Cinematography - Thumbs Up: There were many nice sweeping shots of the different locations and they gave the audience a good feel of the town and the thick woods our heroes hide in. The fall colors in the forests made for a nice backdrop. It also helped create a starker contrast after Captain Cho's attempt to destroy their hiding place changes the terrain.

Conclusion: "Red Dawn" was fast paced and fun. A nice diversion as long as you don't look at it too closely. Hubby felt the original film was better.