Movie Review - Wrath Of The Titans

Wrath Of The Titans 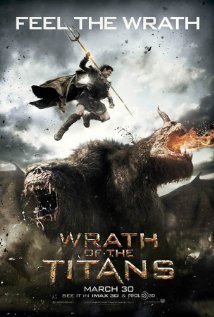 Premise: Ten years after he defeated the Kraken, Perseus is approached by his father, Zeus, to ask for his help. With the waning powers of the gods, the Titans are trying to escape from Tartarus. Perseus says no, wanting to do his best to keep his son out of the paths of violence to comply with his promise to his dead wife. But when the violence comes to their small fishing village, Perseus has little choice. (Rated PG-13)

1) Acting - Thumbs Up: Though it's basically a simple story without a lot of extra meat, everyone was believable and even squeezed extra juice on several scenes. Liam Neeson and Ralph Fiennes had several great moments together. Also loved Sam Worthington's take on his last speech with Zeus - convenying a lot of emotion just by not looking at him. Toby Kebbell was fun and brought a lighter touch to a grim situation. Bill Nighy made a great Hephaestus. I loved that the owl made it back into the film at the home of his creator and had a part without having a part.

2) Special Effects - Total Thumbs Up: I cannot rave enough about the special effects - especially Tartarus and the entrance to same. Fabulous! You truly feel like you're in places so vast as to only have been capable of existing due to gods. But it wasn't in just the big things that the special effects were awesome in, but all the little touches too: Zeus's staff making little lightning bolts as it touched the ground when he walked, smoke added to the flying fireballs and fire, spit for chemical fire from the winged creatures to give it that extra touch of reality. Pegasus was wonderful! The wings truly appearing to be part of the horse. And they were even used for cute humorous effect as well.

All the creatures and monsters were very detailed down to spit and drool. Zeus's partial unraveling and the way the gods turned to sand and fell apart after expiring were inspired. The flow of lava flung by Kronos through the air was almost art. Totally outstanding work.

3) Plot/Story - Thumbs Up: Some people will think the plot too simple, but with all the awesome sights supplied in the film, and the broad strokes on family issues at multiple levels, it didn't bother me a bit. The Greek Titans and gods were probably the first ever dysfunctional family and got used here to good effect on four generations. Some eventually saw the light, others did not, and some only had it reaffirmed.

Yes, some liberties are taken with the Greek mythology, yet overall they kept it pretty straight. Anachronisms filled the dialogue, but that's about par for the course - even had Greeks with British accents. But since most will be coming to see monsters and gods at war, it won't detract much. My only real nitpick was that we really never had any real idea with who or why Queen Andromeda was at war and how they could drop it in an instant to go stop Kronos.

On the other hand, very much enjoyed the added problem of having to have the warriors not pray to Ares as they normally would. A little unexpected touch that did have consequences.

4) Stunts - Thumbs Up: Sam Worthington and his double should be given awards just for all the times the two of them got tossed around, beaten, and flung. Much enjoyed the fact they showed Perseus needing to be sewn up after the fracas at the village. Ouch! And definite kudos to all involved for having battles with things that weren't even there, and making it look fluid and real. They sold it very well.

A pet peeve of ours did surface, mainly the use of shaky cam on a few spots. Since it was used in a nightmare sequence and then very briefly in only a couple of other spots, I ignored it, but hubby was less forgiving.

5) Locations/Cinematography - Total Thumbs Up: The more believable a place looks, the easier to sell the story and this movie did it well. Not only that, but the shots of wide open skies and fields were breathtaking. The merging of real and not real together, except for one spot, were totally spot on.

6) Costuming/Makeup - Thumbs Up: The changes between Hades and Zeus during different parts as power levels increased and decreased were subtle and nicely done. Dirty, grimy faces from hard work and combat were good and mostly consistent. Even Andromeda was not squeaky clean at all times. Added some nice reality to the fantastical tale.

Conclusion: A film with loads of action and amazing special effects. Definitely a must see in IMAX 3D.

Rating: 4 out of 5 (Hubby's Rating: Better for Matinee due solely to the reliance on certain scenes to shaky cam)
Posted by Gloria Oliver at 8:56 PM