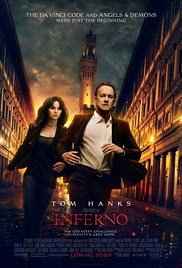 Starring: Tom Hanks, Felicity Jones, Omar Sy, Irrfan Khan, Sidse Babett Knudsen, Ben Foster, Ana Ularu, Ida Darvish, and more.
Directed by: Ron Howard Screenplay by: David Koepp Based on the Novel by: Dan Brown Cinematography by: Salvatore Totino Music by: Hans Zimmer
Premise: Robert Langdon wakes in a hospital in Florence, Italy. He has no memory of how he got there. A cryptic email from a friend and the fact someone tries to kill him make it clear that he's gotten himself into some kind of mess. The weird hallucinations of blood and hell don't help matters. Aided by the young doctor at the hospital, Professor Langdon tries to put the broken pieces back together. (Rated PG-13)
Review:
1) Acting - Total Thumbs Up: Tom Hanks reprises his role as Professor Robert Langdom for the third film of the series. He has great rapport with his rescuer Dr. Sienna Brooks. Felicity Jones does a great job as Brooks, showing multiple facets of her complex personality quite well. Irrfan Khan turns out to be a real treat in the film as the pragmatic Harry Sims. There's some real sizzle between Tom and Sidse Babett Knudsen once some of the secrets are revealed. Great job from all parties.
2) Special Effects - Total Thumbs Up: There are special effects of all kinds in the film. Lots of surreal imagery with lots of detail. There's a painting in the Hall of the 500 in the Palazzo Vecchio which gets brought to life. Looked fantastic.
Rivers of blood running down modern city streets. Physical renditions of Dante's Inferno as painted by Botticelli. Reality and myth all wound together in disturbing imagery. Tons of lovely work.
There are a couple of falling deaths that were well done. Both looked incredibly painful. The work on the second body and the closeup on the face were gruesome and poignant.
3) Plot/Story - Thumbs Up: Doors are a main theme. Those we open, those we close, and those whose frame we stand in. The play with the concept is rather fun and viewed in many angles. Love and its many facets are also explored.
I don't want to say too much and inadvertently spoil several of the surprises in store. Watch for the 'odd socks' as they are hints. A thing or two that seem like mere plot devices are actually something else.
Overall, it all holds together pretty well. They do pound a couple of things more times than necessary, but didn't prove overtly irritating.
4) Stunts - Total Thumbs Up: The film isn't filled with them, but the few there are were well done. The knife fights were quick and well choreographed. A little shaky-cam was used during a water fight, but it didn't detract too much.
5) Locations/Cinematography - Total Thumbs Up: One of the best parts of the Professor Langdon movies are the locations! Salvatore Totino has been involved in the cinematography of all three films. As you view the lovely exotic locations you'll realize why. Several gorgeous panning shots of Florence and other locals will fill the screen. The aerial views from the drone in the park by the Palazzo Vecchio looked great. There's a shot of Istanbul with a huge setting sun that was fantastic. Lots and lots of lovely vistas. I very much enjoyed all the shots of the historical places, especially the areas where normal visitors are not allowed. :)
Super loved the location for the climax. Looked so cool!
Conclusion: Inferno is a nice addition to the Professor Langdon historical mysteries. Another cool puzzle buried in historical trivia and awesome locations. Even has food for thought!
Rating: 3.5 out of 5 (Hubby's Rating: Worth Full Price)
Posted by Gloria Oliver at 10:11 PM