Greetings all!
First, apologies for the lack of consistency on my posts of late. Between 2015 and 2016 life has been an ever filling bucket of chaos! Whee!
Most of it stems from the dreaded, but horribly necessary - Day JOB! I have to eat, pay bills, all those pesky things one does to survive while working above and beyond to push a writing career. Not for the faint of heart on a normal basis. And with all that's been happening at work in the last couple of years...
People leaving the department like every three months or so in 2015. Owner ship changes. Duty changes. And in 2016 the added fun of an accelerated system conversion at the same time as declaring bankruptcy and coming out the other side. Then add in the layoff and people who survived it leaving at the worst possible time...and you can see how full the bucket is.
I've got my fingers crossed that 2017 will finally have things slow down. I want to be able to WRITE! Got a science fiction manuscript screaming for me to edit it so I can shop it around and a new urban fantasy manuscript with several thousand words already down and tabulated research on the side. Neither of which has seen anything from me in at least six months. :(
The peeps from the writers group I belong to are not sure I still exist! (Been with them for a long time and I've always been anal about getting my crits for any submissions in! Now they never hear from me except to catch a glimpse and a word or two from me at cons. (I'm still alive! I promise! I will do my part soooooooonnnnnn!)
The blog schedule has not gone unscathed, and has gotten worse the last few months Apologies! At least I've still managed to show up at the cons. (Though on the last two I missed a couple of my panels - *gack* - Even after looking at my schedule repeatedly! Mind exhaustion anyone?)
We're hitting 3rd quarter close and audit - so it's not looking good for October. But I'll keep struggling to get back on track.
And so as part of this long apology for sporadic posting schedules and more I will also be a good author and announce the impending release of my novelette "Charity and Sacrifice." 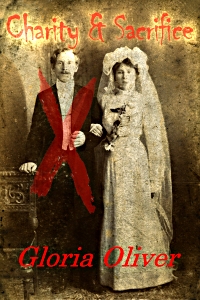 Release date is October 14th! Less than a week away! And in case you missed the post a few weeks ago - it's already available for pre-order! Kindle,  Kobo, and iBook.
The novelette is 10K words and will only be available in ebook. For a short excerpt check the book page here.  It is a historical/alternate history work set in London, England in the late 1800's. :)
If you wouldn't mind, please help spread the word! And wish me LUCK! (I need it!) :P

Posted by Gloria Oliver at 9:05 PM