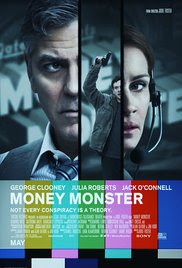 Starring: George Clooney, Julia Roberts, Jack O'Connell, Caitriona Balfe, Dominic West, Giancarlo Esposito, Christopher Denham, Lenny Venito, Chris Bauer, Dennis Boutsikaris, Condola Rashad, Emily Meade, Aaron Yoo, and more.
Directed by: Jodie Foster Screenplay by: Jamie Linden, Alan DiFiore, Jim Kouf Story by: Alan DiFiore and Jim Kouf Cinematography by: Matthew Libatique Music by: Dominic Lewis
Premise: After a seeming computer glitch loses owners of Ibris stock 800 million dollars, an unhappy New Yorker decides to take a stand - he decides to hold a TV host on a stock show hostage, hoping to also snare one of his guests, so he can make them tell the world on live TV how it is that they cheated him and many others out of their money. (Rated R)
Review:
1) Acting - Total Thumbs Up: The film is filled with a lovely powerhouse of actors. George Clooney and Julia Roberts are pure magic as Lee Gates, the show's host, and Patty Fenn, the director of the TV show Money Monster. Jack O'Connell adds in a nice counterpoint of chaos to their otherwise predictable lives. All the characters, large and small, contributed something. Some lovely acting work all around.
2) Special Effects - Total Thumbs Up: While there are no giant explosions, alien invaders, or gigabytes of CGI, we still got a nice share of special effects in the film. The opening sequence showing the electronic workings of stocks was visually fun. Lots of lovely video effects for the show, even some great bits of what "normal" people would have made with regards to a piece of footage at the end. Too darn funny!
3) Plot/Story - Total Thumbs Up: Hubby knows a lot about stocks, so I know if the premise and mystery had seemed to be out there he wouldn't be shy about saying so. But he enjoyed the film as much as I did. I've watched Mad Money with him at home, so we loved their taking Kramer's show one step to the side and three steps up - making it that much more fun. George Clooney can definitely ham it up. :)
While the main plot of the film seems straightforward, there were still several unexpected and lovely surprises. The motivations and moves are well supported, even the ones that seem a little crazy. I loved that even while doing things in a way to make them seem bigger than life, reality kept asserting itself into the equation keeping it 'real' - whether the characters liked it or not. :)
Multiple themes are explored - most centering around those caught in the middle of the madness. Friendship, leadership, the little things we hide from ourselves and others, taking things for granted. Trust - gaining it, respecting it, destroying it - was definitely a major theme in all manner of forms. Making human connections - even despite ourselves. Lots of great dynamics were involved.
Loved the snide, soft glimpses into our lives and attention spans, and how much social media and our phones are a part of everything. The world gets smaller everyday.
4) Locations/Cinematography - Total Thumbs Up: The story spans wide so we get all sorts of location shots from around the world. Also a lot circling around the small world of the studio and those who spend most of their lives creating entertainment for the masses. And how those self same masses will do anything if they feel it will be entertaining. :P
Conclusion:  Money Monster is filled with layers and not all of them centered on the main problem at hand. Strong performances and unexpected surprises made it a very fun ride.
Rating: 4 out of 5 (Hubby's Rating: Worth Paying Full Price to See Again!)
Posted by Gloria Oliver at 10:31 PM