The final cover for Charity and Sacrifice has been approved! So that means I can now share it!

The 10K word novelette, which will be published by Uncial Press, will only be available as an ebook. The cover looks pretty snazzy though!

I love the big, fat X on the husband. Bwahahahaha! 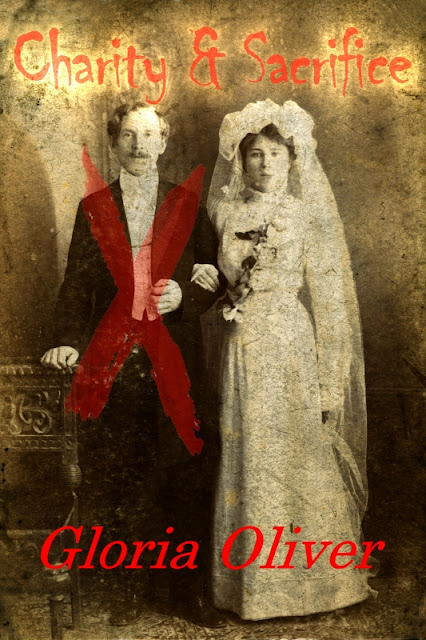 They'll be sending the novelette out for reviews soon. So I will share those as well as they become available. Publish Date is still set for Oct 2016!

I've added the blurb and an excerpt again to keep the it fresh in your minds for the future. BWAHAHAHA!

Trapped in a loveless marriage, will Elizabeth’s sacrifice to regain Robert’s love be in vain?

All Elizabeth hoped to do was to rekindle the love in her marriage. Yet despite ignoring her social obligations and immersing herself in her husband’s important work, somehow this only made things worse.

Her last hope is her unborn child — a source of unrequited love to fill the void inside her. But that too is taken from her. How? Why?

Her doctor avoids her. Her husband berates her. And there are whispers — whispers telling of things that cannot be.

Yet the more Elizabeth ignores the rumors, the more they press on her to seek the truth, so she concocts a plan to find it. To find it and hopefully exonerate both Robert and herself. To discover the reason she’s lost all that’s dear to her. And she will do it, even if she must venture into Whitechapel to do it.

“Dear, you have to eat something. Don’t you want to get better?” Ada once more offered a spoonful of porridge.

Propped up with hard pillows, Elizabeth could sit at an angle. Millie, her personal maid, had come by earlier and brought her a proper dressing gown as well as a brush and pins. The proprieties must be maintained despite the tragedy. She knew Robert would expect it. And it was the only armor left to her at present.

Chastised, she opened her mouth to take the offered food, though she wasn’t hungry and felt mortified to be treated like a child. A child…

Elizabeth’s eyes teared up but she refused to be embarrassed further by her own weakness.

“Has he been to see you yet?” The nurse’s eyes gleamed with curiosity.

“To whom do you refer?” She suspected, but she wouldn’t help feed the rumor mill any more than necessary.

Elizabeth refused to meet her gaze. “I’ve been sleeping a lot, but I am sure he’s come. He wouldn’t wake me, knowing I need the rest.”

Ada’s eyes widened with feigned surprise. “Oh, that could be it, couldn’t it?” She fed Elizabeth another spoonful.

“He’s a very busy man.” Elizabeth wanted to bite her own tongue, knowing the excuse for what it was, and well aware the nurse did as well. “I’ve had enough, thank you.”

“Are you sure, dear?” Ada leaned forward as if to feed her again, except she left the spoon in the bowl. She stared intently at Elizabeth, her next words voiced in a whisper. “There are things you should know that you’ve not been told.”

Elizabeth’s eye twitched. The hollow hole inside her pulsed with need and apprehension. She presumed he was receiving news of her condition from the nurses as well as using them to pass on his orders.

Her gently worded requests for him to visit were just as gently denied. The suspicion something was being hidden from her had hardened into solid fact. Yet she still possessed no information.

To be forced to gain it from the likes of Ada … Everything that ever poured from the woman’s mouth was suspect. She’d watched her long enough to learn that much.

But how else was she to even glean a hint as to what was being kept from her? “Is that so?”

Ada leaned forward a little more. “I could get in trouble sharing what I know.” The nurse smiled at her, expectation tightening the lines on her face. “But a token, a valuable token, would go a long way toward easing my concerns. Think of it as a bit of charity to someone less fortunate than yourself.”

Charity? Extortion was more like it. Elizabeth wanted nothing more than to grab her bowl and shove its contents in the old hag’s face. Yet something in the back of her mind niggled at the word. It had been used in her presence recently… “I might have something at home which would satisfy you. I’ll have it brought for the morrow.”

Ada stood up to go. “My old heart bleeds with gratitude, milady. I’ll be sure to tell you all I know, once your charity has been received.”

Elizabeth clutched her blanket until her hands went numb, sure the nurse was laughing at her as she bowed her way out.