Movie Review - Norm of the North

Norm of the North 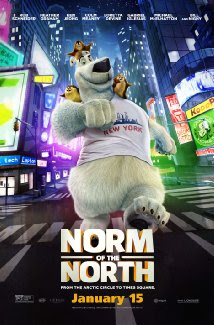 Premise: Norm is not like other polar bears. He has a skill none but his grandfather has, he can speak human. And Norm will need to use his odd skill to save his home once Greene Homes decides the Antarctic would be the perfect place to build and sell condos. (Rated PG)

1) Voice Acting - Neutral: With names like Rob Schneider, Colm Meany, and Bill Nighy, you would think the voice acting on the film would be great. Sadly, this is not the case. :( Most of the lines are delivered without much force or emotion behind them, and there are no real interactions, relationships, or chemistry between the characters. Aside from an exception here or there, the dialogue and voice acting just seemed forced, like they were trying too hard, so it doesn't quite make it.

2) Artwork/Animation - Neutral: I don't believe I've seen work from Splash Entertainment before, and to be honest they didn't do much to excite me about seeing anything else from them in future. While the animation had some neat textures and lovely background colors, it was also very jerky. Norm loves to dance, but most of the time his moves are too muted or jerky and don't look like dancing. On the opposite side, Mr. Greene seems to be made out of rubber, his limbs bending and looping all over the place, more than Mr. Fantastic from the Fantastic 4!

Overall, the backgrounds were decent. But the choppiness of the rest of the animation made it hard to enjoy them. For a feature film, I expected a higher quality and smoother transitions in movements than were evident.

The lemurs were fun. But they were about it...

3) Plot/Story - Neutral: I tend to give animated films a little broader leeway than normal films because the settings tend to be fantastical. Sadly, though, Norm of the North pushed quite a distance past my usually wide threshold for this type of film.

Norm can speak like a human, but he's been exposed only to a little of technology. Yet once in New York city, he seems to know how to read and what a flash drive is and how other technology works. Worse, Norm talks about his feelings and how they are more like a human than a bear's, yet his brother, a supposed typical polar bear, sets up dance routines, uses a headset, and acts way more human than Norm. :( The film is peppered with this kind of inconsistency throughout.

Aside from a couple of cute spots and one or two surprises, the rest of the film was rather bland. Worse, they show Norm bend bars of steel, then not long after he's incapable of tearing/chewing a piece of rope apart, or lifting off a piece of antenna in the water. And since a trip to Antarctica is not that fast, the only time to unmoor the boat from the barge would not have to be in the middle of a raging storm. It just made some of the "exciting" parts appear way too contrived. :(

Conclusion: Norm of the North will be entertaining for the young kids, but teenagers and adults won't get much out of it. The animation quality wasn't what it should have been, and neither was the acting. So overall, it just plodded along. :(