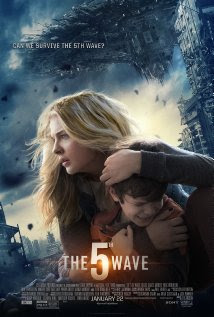 Premise: The Earth is attacked by an unknown and unseen alien species. Their attacks have come in the form of waves - world spanning EMP fields, mutated virus, floods, drones. A fifth wave is eminent, but no one knows the form it will take. Separated from her little brother Sam, Cassie struggles to make her way to him, even as unbeknownst to her, Sam and many other human children are being trained to fight. But more is going on than any of them realize. (Rated PG-13)

1) Acting - Total Thumbs Up: Chloë Grace Moretz does a lovely job as Cassie Sullivan. Watching her transition from normal high school girl to determined survivor was fun to watch. Nick Robinson as Ben Parish/Zombie also did a nice job. Loved his understated demeanor making the 'zombie' nickname have more than one level of meaning. Alex Roe will definitely make teenage girls swoon as the helpful yet mysterious Evan Walker. I totally loved Maika Monroe's performance! Her character Ringer was a lot of fun.

2) Special Effects - Total Thumbs Up: The film has special effects in bursts, so you'll tend to forget how much there's actually has in it. Which would be a crime as they do a great job. I absolutely loved the main alien ship, especially when seen at night. Really would have liked to have gotten a closer look at one of the scout drones. The visuals on the infected humans were enticingly creepy.

The effects for the water attack were phenomenal. The tidal waves and back panned destruction came out great. I was especially impressed with the added touch of the woman in the stairwell. And the view Poundcake sees of the flooded city from the top the building really brought home the devastation.

Late in the film we get a lot of explosions and other forms of chaos. Nice!


3) Plot/Story - Thumbs Up: I've not read the novel this film is based on, so can't say much as to how close it matches the book. I will say, however, that all the teenagers in the audience seemed quite happy with it - at least all the Evan Walker parts. :P

There are a few bits that might give you a 'huh' feeling as the film progresses - most of these are actually hints rather than mistakes. I won't go into it, though, for fear of spoiling things for you guys. But I will say if it smells, there's likely a reason. :P

That being said, however, the plot does have a lot of the typical young adult book tropes (love triangle, good alien, etc.). Happily though, there was also the occasional surprise here and there.

One thing the film does suffer for, however, is the lack of a real reason/need for the aliens to take some of the steps they decide to take for the invasion. Showing off their ship for ten days before actually doing anything being but one of them. For creatures that seemingly don't believe in feelings, they sure like posturing and tormenting their targets. With their technology and what they already shown they can do, some of the steps they decide on later don't make any real sense as a next step.

5) Costuming/Makeup - Thumbs Up: I was worried for a while that even the apocalypse wouldn't mess up Cassie's hair, but they made up for it later. Great touch having Cassie's hair look longer and less styled once she's out on her own. They even put some dirt on her! :) And kudos for not having her running around in heels!

Conclusion: The 5th Wave has some lovely special effects and good acting. Plot could have been a little more diverse, but wasn't bad. Watching Evan Walker fight is a definite highlight (the lake scene was pretty darn nice as well - for the ladies!) :P