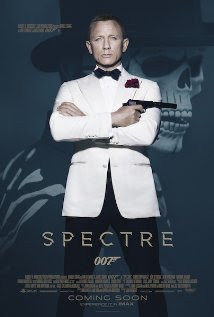 Premise: Though put on suspension, James continues to pursue an unofficial case left for him by M upon her death. The deeper he goes, the stranger the case gets, especially when he comes across documents relating to his dead foster family. All this on the cusp on the double O program being merged with MI5 and a huge push to get all countries to share information between intelligence agencies. Worse, all of it might be connected. (Rated PG-13)

1) Acting - Total Thumbs Up: Daniel Craig once more reprises his role as James Bond 007. As always, he is quite smooth. Ralph Fiennes, Naomie Harris, and Ben Whishaw do great work as M, Moneypenny, and Q. It was lovely to see the last two get some play! Andrew Scott was nice and slimy as C. Christoph Waltz created quite a presence as Oberhauser. Léa Seydoux also did a great job as the unwilling Dr. Swann.

2) Special Effects - Total Thumbs Up: Cool gadgets, explosions, planes, loads of fun treats from the special effects team. The prop plane scenes were very reminiscent of the Roger Moore period. The facility in the desert harkened back to the Sean Connery period as well. A lot of subliminal homage seemed to be going on. Very nice!

Super kudos on the whole "Day of the Dead" celebration in Mexico. The parade scene and the super cool floats were outstanding! The girls with the turning dresses almost appeared to be floating along. (Hiding Segways underneath perhaps?) :)

3) Story - Thumbs Up: The film starts with a sentence - "The dead are alive" and aptly starts on the "Day of the Dead". The entire film uses this theme in a myriad of ways. It also ends up tying together all the previous Daniel Craig films as pieces of a greater whole, and a much larger threat to the world than any of them ever imagined.

But more than just Daniel's films got represented. There were a ton of tiny moments or bits paying homage to many of the previous Bond films as well. The way the prop plane was used, the thug Hinx, who was very reminiscent of Jaws in Moonraker, and more.

While the mini mission starting the film was definitely awesome, a couple of things were odd. The main being why James hit the helicopter pilot when the man was unarmed and a plaza full of people lay below, especially since the pilot was the only one keeping it in the air. Later, yes, he needed to hit him, but when he had his hands full with another man at the beginning? It was odd.

The way Christoph Waltz is introduced in glances and bits was very well played. The entire scene in the meeting in Rome was fantastic and said so much about the man, without him actually doing a lot. Later, his character is diluted a little, his explanation for his involvement and interest in James pushed as the reason he's done certain things, yet, not quite fitting with everything. His main scheme was evident, but the group's ultimate goal? Not so much. Or at least what was presented didn't seem enough? I could have missed something though.

Madeleine Swann was fun. Unexpected things for her and James in the film - the past once more affecting the future. What was funny is how much is given away during the beginning song! Almost a trailer in its own right. lol. (Heck the title song "Writing on the Wall" also seemed to be an in-joke as you'll note on a wall towards the end!)

One more bit of fun - Moneypenny, Q, and the new M get a bit of action too! Nice to see them get involved. (And that Moneypenny is NOT waiting for James. heh heh.)

4) Stunts - Total Thumbs Up: Lots of hand to hand combat, car chases, car crashes, airplanes, helicopters, and more! The stunt department was kept very busy. Shaky cam came into play during the foot chase in Mexico, but thankfully it didn't last long and not really used again during the rest of the film. Yay!

Loved the fight scenes on the train! Talk about destruction and beat up stunts! This fight also has elements which will remind you of the Roger Moore James Bond films.

5) Locations/Cinematography - Total Thumbs Up: The film has bits all over the world, so a ton of different locals are used -- Mexico, Italy, Austria, Morocco, England.

As I mentioned earlier, the "Day of the Dead" celebration in Mexico City was fabulous! The cinematography took full advantage of the parade as well as all the other locations. The giant scope of some of the scenery were perfect for grandiose sweeps to feed the eyes.

6) Costuming/Makeup - Total Thumbs Up: They totally had me on the "Day of the Dead" sequence - the costumes and masks were totally awesome. Jame's costume is the one you see in the back on the movie poster, making several layered in-jokes since James is an assassin and therefore death, but also merges well with the name of the evil organization. :P Check out the cool dresses and the painted skeleton parts on the ladies, and the nice suits for the men. Loved that whole section!

Conclusion: "Spectre" is full of all the things we love about James Bond - lots of action, foreign  locals, cars, guns, and more. A nice ending to a long, unexpected story arc are things are brought together.

Rating: 4 out of 5 (Hubby's Rating: Worth Full Price to See Again)

Posted by Gloria Oliver at 8:55 PM