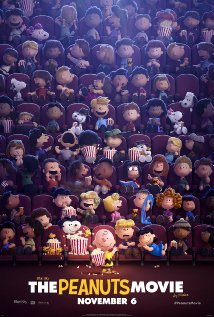 Directed by: Steve Martino Written by: Bryan Schulz, Craig Schulz, and Cornelius Uliano Based on the Comic Strip by: Charles M. Schulz Cinematography by: Renato Falcão Music by: Christophe Beck

Premise: Though bad luck and frustration have been his constant companion, Charlie Brown decides he wants to become a new, better boy when a cute red headed girl moves in across the street. Unfortunately, this is easier said than done. And while most think he doesn't stand a chance, with his trusty dog, Snoopy, and a few close friends, maybe Charlie Brown can make things change and make a good impression. (Rated G)

1) Acting - Total Thumbs Up: If you look at the cast, most of them are young actors. The fabulous part about this is that the actors they chose sound very much like the voices in the old Peanut specials on TV. Everyone does a great job.

Loved Bill Melendez - he's been doing Snoopy's and Woodstock's voices since 1966! Noah Schnapp was darling as Charlie Brown. Anastasia Bredihina was a perfect Peppermint Patty. Trombone Shorty took on the task of the Wahwah adult voices. (The film site has a link to a Wahwah machine. You can even share the wahwah for the words you type in. Too cute!) Lovely work by all!

2) Artwork/Animation - Total Thumbs Up: Blue Sky Studios are the same people who brought us Ice Age and Scrat! That being said, we get a new Ice Age short called Ice Age: Collision Course - "Cosmic Scrat-tastrophe" - they went all out on this one. lol. (I have a link to the short on Monday's Mind Sieve 11/16 post  so come on back by - hint hint. :P)

The studio normally does great work, but I think they went all out for this one. Charles M. Schulz and all the TV specials have a certain style and feel. Not only did Blue Sky Studios take that on, but they also decided to do this film in 3D! And it was marvellous! Despite the textures and the 3D depth, they made sure to keep all the bits from the actual strips - thought bubbles, Woodstock's flight trails, the facial expressions and eyes made with a drawn pencil lines, and more.

I also loved how in several places, they moved to thought bubbles and did the contents in the straight black and white line drawings of the 2D comic strip style. They really got inventive with this one. Awesome work.

3) Plot/Story - Total Thumbs Up: Peanuts is a comic strip with years upon years of content, dozens of TV specials, and more. And Blue Sky Studios managed to pick all the nuggets which bring out all the best of Peanuts and presented them in a way that would not only tickle fans of the comic strip and TV specials, but also make it easy for those who've never seen The Peanut's world before to fall in love with it.

All the iconic stuff is there: the kite eating tree, the pitching mound, Lucy's psychiatry stand, the football, the typewriter, even the Great Pumpkin is mentioned. But best of all - lots of the Red Baron! We even end up with a story inside the story, as Snoopy plays out some of Charlie Brown's own troubles as the World War I Flying Ace and finds his own cute girl to fancy. Several elements were even shown as this being where they began. The way they threaded in the Red Baron was brilliant! They made him a force to fear in reality as well as in Snoopy's imagination. Lovely!

The story itself is interesting and full of all those pains we suffered through while growing up. As ever, Peanuts is entertaining, amusing, and even thought provoking. A really nice job overall.


4) Music - Total Thumbs Up: The Linus and Lucy theme of old is brought back to help give us waves of nostalgia (plus it's really a catchy theme!). They even brought in a clip from one of the specials - the caroling scene song - "Christmas Time is Here". Several of these bits were from the original scores by Vince Guaraldi Trio. Christophe Beck kept his part of the score light and airy and it blended quite well with the original scores - he even gives his own twist to the Linus and Lucy theme. All the music worked very well together.

Conclusion: The Peanuts Movie encapsulates everything you have ever loved about Charles M. Schulz classic comic strips and the ton of TV specials. It will make for a wonderful nostalgic trip. For those not acquainted with the comic strips, however, this film will be a marvellous introduction to all the awesome characters and lively imagination which endeared this strip to people the world over. Tons of fun for the whole family.

Posted by Gloria Oliver at 9:30 PM