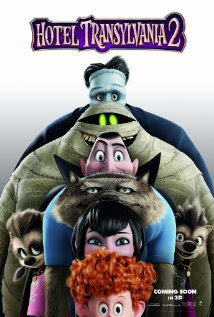 Premise: Now that Drac's daughter, Mavis, has married Jonathan, the crew at the Hotel Transylvania  move to a new phase in their lives when Mavis gets pregnant. Drac loves his grandson Dennis and knows he will soon show his vampire heritage (his just a late fanger), but everyone else thinks Drac might just have to settle for a 'human' grandson. But if Dennis is human, Mavis wants to move to California so he can grow up with others of his kind. (Rated PG)

1) Voice Acting - Total Thumbs Up: Adam Sandler is a total hoot as he reprises his role as Dracula. (Blah blahblah!) Asher Blinkoff is adorable as Dennis (aka Dennisivich). Kevin James, Steve Buscemi, and David Spade are too much fun as Drac's partners in crime.

2) Artwork/Animation - Total Thumbs Up: One of the fun things about the Hotel Transylvania films is the artwork. How they take such iconic figures like Dracula, Frankenstein, etc. and make them into average older folks. A mummy with weight gain and back issues, potbellies, slouching, and having to deal with the fact they are all getting too old for all the antics. And all of it just makes them all the more enjoyable to watch for it.

Kudos for Dennis' hair. It must have driven the animators nuts, yet they also have so much fun with it. The Batman scene is hilarious. And watching the feral, piranha like werewolf kids is a blast. There are a ton of visual jokes. Also tons of lovely artistic touches.

We also get even more old horror film homage sprinkled through the film. How many of these monsters will you recognize? :)

3) Plot/Story - Thumbs Up:  Just like the first Hotel Transylvania, the film deals with several themes and family oriented issues. Now that the humans and supernaturals are mixing together, the fact Mavis has a half breed child has opened up a whole slew of new possible problems.

Though at first look it seems obvious, possibly painful, and definitely cliche, Mavis as the overprotective mother is a lot more than you see at face value. As a vampire, she's still very very young, and in the film we see her struggle with the dichotomy of being a parent and needing to be an adult versus still wanting to be a kid and have fun. Deeper still is her worry that Dennis will be human rather than a vampire as the 5 year threshold approaches. Though she denies it, it becomes obvious she has her own doubts as to his survival out in Transylvania if he turns out as she suspects. And though it interferes with her relationship with her husband and her father, her fears very much come to rule her life.

Another fun theme will strike home with the older of those viewing the movie - mainly that things never stay the same - and the places of our youth and recollection can be quite different from what we remember.  The park and the vampire camp are perfect examples. Poor Drac just could not catch a break. lol.

4) Music - Total Thumbs Up: Mark Mothersbaugh does a great job with the soundtrack. The opening music was sublime and totally reminiscent of the old black and white horror films. It perfect for the creepy castle (hotel) entrance scene. Kudos!

Conclusion: If you enjoyed Hotel Transylvania, you should very much enjoy Hotel Transylvania 2. Some emotional angst along with some visual and audible humor. Fun for both kids and parents. No extra bonus at the end of the credits though.