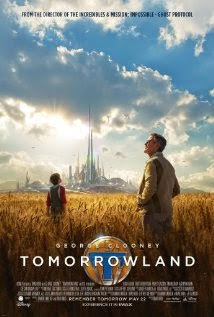 Premise: Casey's dream is to go to space, so she's been sabotaging the equipment being used to dismantle NASA's launch platform trying what she can to keep it alive. When she's caught and then released, she ends up with a strange pin she's never seen before. And when she touches the pin, it lets her see a marvelous city full of technical miracles. But when she uses up all the power on the pin and heads off to find information about it at a SF collectibles store, she finds there are people out there willing to kill her just for having it. (Rated PG)

1) Acting - Total Thumbs Up: Tomorrowland has a great cast - especially the kids. Thomas Robinson and Raffey Cassidy were totally adorable in the 1954 sequence. Thomas rattled the technical terms and explanations like a total pro - and his instant attraction to Athena was like a neon sign. Britt Robertson did a great job as the spunky Casey. Her reactions to the insanity were great. George Clooney as Frank Walker was an excellent choice, just the right amount of disillusioned bitterness and sparkling hope. Sparring verbal matches between Clooney and Britt were a lot of fun.


2) Special Effects - Total Thumbs Up: The special effects are totally worth seeing in IMAX. From the giant wheat field to the lovely lines of the city in Tomorrowland, there's so much to enjoy visually. A lot of attention is paid to detail, even going so far as to adjust the tech and look-and-feel of it during the different periods we see Tomorrowland or technology on Earth derived from it.

From the pin to the different permutations of the jetpack, the special effects group wove in subliminal homage to a ton of SF from the past - Jules Verne/Steampunk, 2001 Space Odyssey, Flash Gordon, Star Wars, Star Trek, The Day the Earth Stood Still and more. (And that's on top of the ton of SF related material flashed around at the collectibles shop!)

The sequences where Casey touches the pin are fab. She's lucky not to have broken something! lol. The switching back and forth was seamless, making it that much easier to believe it was really happening.

Tomorrowland itself was fabulous! We get a little bit of a quick tour, but it will need a couple of viewings or more to see everything, there's so much going on. Heh heh. Also the effects used for physically travelling to Tomorrowland and those for the tachyon time distorted future images came out really well, giving both a nice unique touch.


3) Plot/Story - Thumbs Up: The film covered all sorts of themes - family, dreams, not giving up, love that transcends, making a difference, good and evil. Many of these are interwoven together and played off each other as well. There's also a lot of minutia in the visuals to fill in information even before some of the themes are explored.

A few bits at first seem not to make sense or appear to be errors, but this is only because the pace is so fast the audience is expected to realize the reasons for themselves. For example: automatons killing people and trying to kill the main characters on Earth, yet these same characters not being immediately shot in Tomorrowland - at first it seems an odd incongruity until you realize that on Earth their actions are not being seen while in Tomorrowland, the same actions would be noticed and commented on by those with power to make a stand. With the consistently fast pace of the film, you have to put things together on the go!

All the scenes where there are one-to-one interactions really were well setup and executed. The whole section of Casey trying to get into the house and what she does to get in and what happens with Walker after she does are priceless.


4) Stunts - Total Thumbs Up: Most of the gags were usually a mix of CGI and live action. For the most part you couldn't tell which was what and worked together to great effect. The chase and battle scenes at Walker's house were fab!

5) Locations/Cinematography - Total Thumbs Up: The cinematography was awesome! The view of endless water in the secret room under the World's Fair, the golden wheat fields in Tomorrowland, all the shots of Tomorrowland itself, and what they do with Paris - everything seemed bigger than life, the amazement factor ratcheted up high. The time lapse sequence of the NASA launch pad and the other visuals from using the time map were very cool.

6) Music - Total Thumbs Up: Michael Giacchino did a great job on the score. It had a very strong John Williams vibe to it. It was almost as if the music, and not just the visuals, were paying homage to all the SF that has spanned and entertained us for the last 60+ years. Nice!

Conclusion: Tomorrowland is a fun, fast paced adventure. Great visuals and lots of witty repartee. There also a three second or so extra bit at the very end of the credits that was the perfect conclusion for the film. :)

Posted by Gloria Oliver at 8:59 PM