(Sorry there's been no movie reviews for the last couple of weeks. Between a super late night for Avengers and sickness at home...) 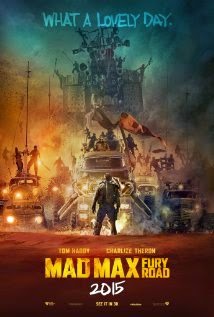 Premise: Dealing with his own demons, Max Rockatansky is caught and dragged to the Citadel to be used as a blood sack for reenergizing White Warriors. But when an Imperator breaks ranks with one of the Citadel's tankers and some hidden cargo, Max unexpectedly gets one last chance to struggle for freedom - for Immortan Joe, leader of the Citadel, wants the cargo back - at any cost. (Rated R)

1) Acting - Total Thumbs Up: Max is definitely mad and Tom Hardy conveys it quite well. Yet in his madness might also be salvation. It was fun watching the almost feral man slowly regain his humanity and self. When he finally says his name, you can almost feel him dragging it back up from oblivion. Charlize Theron is tough, competent, and strong where it counts. Nicholas Hoult was great as Nux - gung ho 100% yet we also see him evolving, proving he is more than what the Citadel made him.

2) Special Effects - Total Thumbs Up: Since the film is written and directed by pretty much the same group of people responsible for the previous Mad Max films, it comes as no surprise that there is a TON of special effects with regards to explosions, cars, flamethrowers, and more! As pimped and crazy as the previous Mad Max films made the vehicles, they still somehow managed to raise the bar again. Booyah!

Fantastic work too on the Citadel, the people powered machines there, and the overall look and feel of the place. Cogs in the machine!

The approaching field of storms in the dessert looked fantastic! And once they drive in between them, and  some of the consequences of doing that - totally fab! The CGI and Cinematography shots of these and other scenes were just gorgeous.

Nice job too on the mutations! They ranged from hardly noticeable to downright disturbing. All the branding and scars looked real as well. Great job!


3) Plot/Story - Thumbs Up: You get a very fast intro and not much detail as to what has brought the world to this junction. Seemingly, Max was a pre-apocalypse cop, which doesn't exactly jive with the civilization we see at the Citadel - as it implies a longer span of time, like several generations, but I may have missed something. Like I said, very fast intro.

Loved that they actually did try to develop distinct cultures for several of the groups we come across. A lot of it the audience has to put together on their own, but they do give you enough info or visuals to help you get there. Every cog has its place, and every survivor above a specific social strata had a purpose all their own.

We don't see enough of the other groups to put as much together, but the fact they actually are different and conform to their areas in different ways was definitely a plus.

Story was pretty solid overall and just enough to string the action together without getting in its way. There's even some surprises! Which was lovely. The only place it fell apart a little was towards the end. Injuries suffered by one of the characters would in no way actually be overcome the way they showed. This was the only major disappointment, though - the action doesn't leave a lot of time for anything else. :P

Though water and fuel play a major piece of what people want, mother's milk and trying to make perfect children added new layers of complexity and food for thought. Another new and fun bit was the addition of drums and music to the hunt - things that are ancient and traditional - and in the film wove into the actual music soundtrack, tying their reality in with the fiction of the film.

One large bit of kudos to the writers for having a heroine with a prosthetic. Gave a lot of weight to her years of pulling up hill to get to the position she had when she finally made a run for it. Nicely done!


4) Stunts - Total Thumbs Up: Mad Max films would be nothing without stunts - and this film is chock full of them. CGI does play a major part in a lot of them, but there's plenty of real ones as well. Between all the guns, cars, exploding javelins, flamethrowers, hand-to-hand combat, and explosions, I doubt anyone will be disappointed. Great job!

5) Locations/Cinematography - Total Thumbs Up: Fury Road goes back to its roots and filmed a lot of the movie in Australia. This rendition, however, also added several locations in Africa to its repertoire. All the locations set the mood perfectly. Awesome choices all around - which got taken full advantage of in the cinematography! Sweet!

6) Costuming/Makeup - Total Thumbs Up: The costuming and makeup departments did great work. From the emaciated rabble at the Citadel, to the Immortan Joe's White Boys and Warrior Boys, they had their own unique looks and were instantly recognizable as to their strata. The tattooes on the blood sacks as well as the carved flesh and scars of warriors and others, and the Citadel's brand on those they claimed for themselves were distinct and added a lot of flavor.

Even more kudos for making the dress, look, etc of the rocky area group and that of the people in the marshes and beyond unique to their own groups.

Conclusion: For fans of the previous Mad Max movies or anyone who loves a good action film - Mad Max: Fury Road totally delivers! Between the great stunts, special effects, and cinematography, there's a lot to enjoy on this chaotic ride.