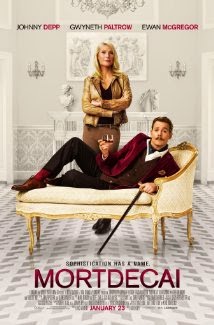 Directed by: David Koepp Screenplay by: Eric Aronson Based on the Novel by: Kyril Bonfiglioli Cinematography by: Florian Hoffmeister Music by: Mark Ronson and Geoff Zanelli

Premise: Charlie Mortdecai is an art aficionado, a semi-rogue, and owes eight million pounds in back taxes. Desperately trying to find a way to pay, he decides to help an old rival when he's asked for his assistance after the murder of an art restorer in Oxford. But his marriage becomes strained when his wife finds out he's grown a mustache. A situation that leaves his old rival, an MI-5 agent, thinking he might finally get his chance to steal away the woman he's been in love with since college. (Rated R)

1)  Acting - Total Thumbs Up: The story is told from Mortdecai's perspective, which gave Johnny Depp even more room to play than normal. And play he does...to good effect. Gwyneth Paltrow was a lot of fun as Mortdecai's mustache disapproving wife. Paul Bettany almost steals the show with his portrayal of Jock, Mortdecai's suffering but stalwart manservant. Ewan McGregor was definitely adorable as Mortdecai's rival and MI-5 operative.

2)  Special Effects - Total Thumbs Up: Lots of nice little special effect touches are woven throughout the film. The most noticeable ones are the giant block letters merged with the spanning views of the cities the action takes place in. They even find ways to have a little fun with it as things move along.

3) Plot/Story - Thumbs Up: The film is based on a book called "Don't Point That Thing at Me". I've not read it, so can't say if it is also a tongue-in-cheek story, but from the title, it might very well be. (Also found out Jock's full name is Jock Strapp. So, I'm thinking definitely yes.)

Much like the film "Austin Powers", there are a lot of jokes which British audiences will appreciate more than American audiences. (This excludes Americans in the US who love British TV, however!) There is definitely humor and fun poked at both the British aristocracy and the concept of the perfect manservant. It even brings up modern day British nobility problems of debt and the need to find new means of income to maintain their households, despite their noble lineages.

One unexpected story thread is that of "a man and his mustache." The odd thread gets play throughout the film. The bit with the elevator at the American hotel was priceless. Amusingly, the mustache itself was lovely, but the expressions created by Johnny and the attention it drew to his bad teeth, totally ruined how it looked on his face. Gwyneth Paltrow's reaction to the thing were definitely entertaining. The odd dynamics of their marriage were rather amusing as well.

Lots of innuendos, some vulgarity, and definitely some slapstick. The plot is also reminiscent of Peter Sellers' Pink Panther films, full of misunderstandings, backstabbings, bumbling, and bandying about. Add in the rumors of a lost painting not seen since WWII and the possibility it could lead to a lost Nazi fortune, and hijinks ensue.

Though the story is set in modern times, there's a very James Bond 60's feel to the film, the music even conforms to this and support the illusion.

4) Stunts - Total Thumbs Up: The stunt department deserves some well earns kudos on this one. There are several fights, with guns and without, an unusual sword fight, and one of the most bizarre car fights with musical chairs ever.

5) Locations/Cinematography - Total Thumbs Up: The story bounces around to several countries and cities, sometimes in quick succession. Some lovely and inventive camera work is used as the audience travels from place to place. This served to break up all the travel nicely, so it wasn't the same old thing every time. The two groups were freshly inventive on these sequences. They looked great!

6) Costuming/Makeup - Total Thumbs Up: Great work with the costuming and makeup. They somehow managed to make Mortdecai look respectable and worthy of his title one moment, and not so desirable or good the next. Some of the color schemes definitely looked to have come from the Austin Power's collection, which worked very well. Though of course these came with matching ascots and a lovely cane - Mortdecai is of the nobility after all.

Some truly nice makeup work on the ever suffering Jock. The scar over his eye and the twisted eye ball looked great. Made some of Jock's expressions even more poignant.

7) Music - Total Thumbs Up: The soundtrack by Mark Ronson and Geoff Zanelli does a lot to set the international intrigue vibe to the film. Has a very 60's spy/James Bond feel to it. Great for setting the mood.

Conclusion: Mortdecai's humor will not be to everyone's tastes. Some knowledge of England is needed to get some of the subtle pokes at British nobility and the serving class. Very tongue-in-cheek.