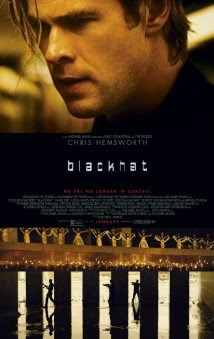 Premise: When someone causes a nuclear reactor in China to overheat, then causes havoc on the New York stock exchange, China and the U.S. join forces to find the cyber culprits and stop them. But Dawai, the head of the Chinese contingent, decides they need one other person on the team if the bad guys are to be caught before they cause more chaos, his friend from his MIT days, Nick Hathaway - who's currently serving out a thirteen year sentence in a U.S. prison. (Rated R)

1) Acting - Thumbs Up: Chris Hemsworth did well as the guarded but helpful jailbird Nick Hathaway.  Leehom Wang, though, stole a lot of the spotlight as the smooth Chinese investigator Chen Dawai. Viola Davis also gave a great performance as Carol Barrett, the FBI agent in the joint task force. Wei Tang did well as Dawai's sister and Nick's love interest, though her accent was so heavy, it wasn't always easy to understand her English, so some important comments and moments were lost here and there.

2) Special Effects - Total Thumbs Up: The beginning of the film was a lot of fun as the special effects department worked some great magic and lovely use of macro photography to draw the audience down into the inner workings of the computers and the electronics of the Chinese nuclear power plant. This fun bit totally set the expectation bar high. Sadly, the rest of the film didn't live up to the great work in the beginning, though not from the special effects angle.

The explosion at the plant was well done. The small truck at the parking lot and how it's used was fabulous. Definitely a different approach to breaking and entering.

There's lot of gun play in spots as well as the use of other more potent armaments. There were at least two spots were the amount of lead flying was close to jaw dropping.

3) Plot/Story - Neutral: Sadly, there were a lot of fallacies in the film. While it is possible to be in jail for eighteen months and still be on top of the 'game' with programming, fifteen years or so is a lot harder to swallow. Operating systems change in but a handful of years and using illegal cellphones in jail are not going to keep you in the latest programing language.

This movie is long for an action film, 133 minutes, but the time wasn't always used to good effect, which was a pity. While we get some info here and there about Nick, we pretty much get nothing on Lien aside from her being Dawai's sister and a network specialist. There's a quick hint that Nick and Dawai were super close, once upon a time, yet nothing is even hinted at for this seeming closeness or the fact they allowed each other to lose touch.

As a bad guy trying to pull of an amazing feat of money making, he really wasn't very smart. Of all the places to try to use your 'special' program, why would you ever pick on a nuclear plant? The guy basically lit up a giant sign saying 'look look look at me!' when stealth is what was called for. It was a stupid risk and in the end, because he did it that way, he is eventually stopped. (And the equipment he was testing wasn't even that uncommon!) If he'd skipped the nuclear plant altogether and gone for a test somewhere less volatile, no one would probably have ever known he'd ever pulled his ultimate stunt and he and his cohorts would have made billions!

We're not going to talk about the lame love setup on this film. Had to have been pure hormones. Lots of long glances with strung out time which led to a lot of nothing.

And, if you don't want the audience to realize you're about to blow up the car - don't wait so friggin' long to do it! (I freaked my husband out. I did an aside and said "the car's going to blow up". Two seconds later, blow up it did! They really waited way too long - like holding up a sign.)

4) Stunts - Thumbs Up: The film had a nice fight scene in a Korean restaurant, though it was totally spoiled by the dreaded "shaky cam". Nothing wastes orchestrated violence more than the audience not being able to see it because the screen is shaking. Ugh. It moved around so much you couldn't even tell two of the guys had knives. All that beautiful stunt work wasted. Sigh. (The last half of the film was chuck full of shaky cam moments too. Double Ugh)

5) Locations/Cinematography - Total Thumbs Up: Aside from the beginning sequence, the locations and spanning cinematography shots at those spots were the most enjoyable parts of the film. Shot is Hong Kong, Jakarta, Kuala Lumpur, and elsewhere, there was a lot of things to see. And they picked great times in the day and angles to do the spanning shots of these places as well - just at sunrise or almost past sunset - some truly amazing colored skies and clouds, as well as tons of lights shinning up from the darkness. Some truly gorgeous filming. Too bad it was wasted on such a slow, clunky plotted movie. The patchy editing didn't help much either...

Conclusion: Started out great, had some awesome cinematography shots, but the clunky, drawn out plot and lack of depth to the characters just bogged the whole thing down. A pity, really.