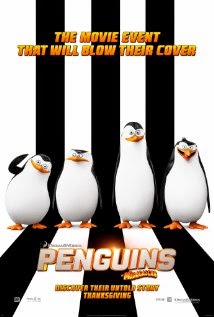 Premise: Leaving the rest of the animals at the circus to go celebrate Private's birthday, the penguins's plans get interrupted when they're kidnapped by an unknown enemy. This turns out to be Dave, who has a problem with all penguins - Skipper and the others but the first of many. However, the four escape, taking with them the mutagen Dave threatened them with. They're handling their escape just fine until the arrival of the North Wind - a self proclaimed animal protection organization.  And they do not believe our four operatives anything but innocent, vacuous penguins. Will the two groups be able to acknowledge each other and their unique skills before Dave enacts his nefarious plans on penguin kind? (Rated PG)


2) Artwork/Animation - Total Thumbs Up: Dreamworks continues to prove they have what it takes to make animated films. Crisp colors, super attention to detail, and some awesome texture generation were used throughout the movie. Cheezy Dibbles are a major part of the film and they look crunchy, their cheese powder going everywhere, in effect totally convincing the audience they are the messy, noisy snacks they are.

Lots of cool vehicles and HUD screens. The North Wind has all the cool gadgets you'd expect from a top secret world organization. The penguins work the opposite direction, all their instruments made from what's around them - a pivotal part of their continued survival. (And a whole lot of luck!)

The entirety of the gondola chase scene in Venice shows it all. What an inventive and wild ride!


3) Plot/Story - Total Thumbs Up: The Penguins have always been my favorite part of the Madagascar movies. I fell even more in love with them in their Nickelodeon TV series The Penguins of Madagascar. So I was very pumped when the previews came out for this film.

The story actually picks up at the end of the last Madagascar film, after we go through a hilarious flashback of how the four intrepid penguins met and what set them on the path as international daring doers. There's a lot of tongue-in-cheek moments, like the dramatic dialogue of the documentary men over the young penguins's plight, then actually shoving them into it.

Skipper, Kowalski, Rico, and Private are all about saving the world, going on missions, and having fun doing it, so the adventure takes on the look and feel of a James Bond film while also keeping some of the problems being faced by the foursome closer to home.

A lot of themes are covered - family, finding ones place, trusting in yourself and those around you, not dismissing others just because they do not fit your mold of how they should be. If you've watched the TV series, the plot involving Private will seem a little heavy handed, but otherwise should flow flawlessly by.

The film is full of cute moments, jokes, slick maneuvers, and as always lots of penguin fun.


4) Music - Total Thumbs Up: Lorne Balfe did a fantastic job on the music score. Fast paced tunes with just the right tone for awesome spy daring do!

Conclusion: "Penguins of Madagascar" is a fun ride with plenty of fun for adults and kids alike. A little extra fun during the credits, but nothing more at the end - well worth staying for that middle bit though. Great penguin fun!