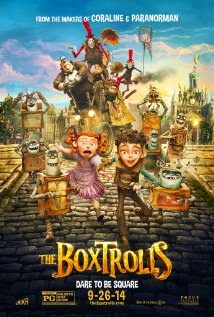 Directed by: Graham Annable and Anthony Stacchi Screenplay by: Irena Brignull and Adam Pava Based on the Novel by: Alan Snow  Music by: Dario Marianelli

Premise: Eggs, a young boy raised by Boxtrolls, encounters a girl as he tries to find his kidnapped friend, Fish. But, Winnie is not the only thing he discover while up in the human world, he also finds out that lies are being told about those who raised him. That the town believes Boxtrolls to be evil and must be eradicated. (Rated PG)

1) Acting - Total Thumbs Up: Ben Kingsley made a fun Archibald Snatcher, especially when eating cheese. Isaac Hempstead was adorable as Eggs. Elle Fanning as Winnie was a total hoot. Not your typical girl that one. Nice! Nick Frost, Richard Ayoade, and Tracy Morgan added a lot of depth to the film and were a lot of fun as Snatcher's stooges.

2) Artwork/Animation - Total Thumbs Up: Laika just gets better and better. Their combination of physical sets, poseable characters, CGI, and blending of other effects just make for truly spectacular and fun visuals.

The look and feel of the Boxtrolls cavern was scintillating. And the contraptions and beauty they create from human trash endearing. The cavern was even a self contained eco system, with the boxtrolls wondering above solely for scavenging purposes. (They seem to not be able to help themselves!)

I also totally loved the weird town - a steep mountain of houses and shops - a totally isolated little island. And the trolls themselves were utterly adorable.

3) Plot/Story - Total Thumbs Up: Though the commercials give it away, the film starts in such a manner as to make the audience believe there might be something evil about the Boxtrolls. Their glowing eyes and expressions alone are enough to give anyone a fright.

There are a lot of types of evil represented in this film. It was truly a lovely representation of several kinds, yet it was left entirely to the audiences' interpretation rather than getting preachy or sanctimonious. There's the evil of indifferent parents, the evil of selfishness, the evil of neglect with regards to work which affects others as well as family, the evil of assuming you're good and just rather than think about what you're actually doing and what it means.

Loved the use of red hats and white hats - a concept tying back to religious infighting amongst oriental monks in ancient times. I also enjoyed the ungirly like bloodthirstiness of Winnie. Her fascination with gore and the horrific - too funny.

The Boxtroll society was fascinating as well, all cogs of the same machine, yet individuals with different tastes and quirks.

Archibald Snatcher was a wonderful bundle of contradictions and surprises. He has a dream and it is worth any price - you won't believe what he's gone through and willing to go through for it on a personal level either. Dang!

The conversations between Mr. Trout and Mr. Pickles were brilliant. Like Snatcher, they too believed in things not necessarily true or real, yet clung to them for all they were worth.

Conclusion: "The Boxtrolls" is a very cute film with tons of unexpected depth and food for thought. The animation is great and fun. Lots of stuff for both kids and adults. And there's a super cool bit in the credits where the curtain is moved aside and the audience can see the magic behind the product as it plays. Nice!

Posted by Gloria Oliver at 9:12 PM