Movie Review - Magic in the Moonlight

Magic in the Moonlight 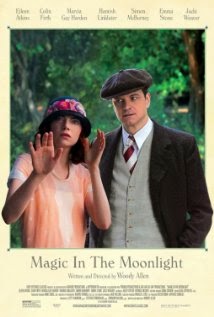 Premise: A fellow magician asks Stanley, aka Wei Long Soo, to come with him to the south of France to help debunk a psychic who's ingratiated herself with a friend's family. Exposing fake mediums being one of his hobbies, Stanley agrees. Yet Sophie turns out to be very different from what he was expecting. And her powers seem to actually be the real thing - throwing his beliefs about life entirely topsy-turvy. (Rated PG-13)

1) Acting - Total Thumbs Up: Colin Firth is delightful as the egotistical, genius, and magician, Stanley. He does a fabulous job of being the arrogant disbeliever while charming the audience at the same time. Emma Stone was a lot of fun as Sophie, who is the almost polar opposite of Stanley. Eileen Atkins as Aunt Vanessa gave as good as she got. It was a blast watching her steer her nephew along. Seeing Jackie Weaver again, as bubbly as ever, was an extra treat. Hamish Linklater just made you feel sad for poor, besotted, ukulele playing Brice.

2) Special Effects - Total Thumbs Up: A lot of subtle effects - from the beginning with the amazing skills of Wei Long Soo, to the floating candle, or the fast moving lightning storm. The special effects department did some lovely work.

3) Plot/Story - Total Thumbs Up: I tend to have coincidences or 'runs' of similar things and this film landed in my current trend of things to stumble into in the form of both the 20's and magic. (Hubby and I had just this week watched the Houdini special on the History Channel as well as episodes of Poirot.) In many ways Stanley is a British Houdini - they even mentioned how he got his start as an escape artist. Another aspect related to Houdini was how he spent a lot of time after his mother's death seeking a true medium - and exposing all those who were fakes. Houdini's intent (and Stanley's secret hope) to find a real medium through whom he could contact his parent.

Wei Long Soo even did the disappearing elephant trick!

The film's story is pretty straight forward, but does have some lovely unexpected twists. It plays a lot with expectations and assumptions, even the blindness of narrow mindedness. But what makes the film a true treat is the witty repartee between Sophia, Stanley, and others as well as the giant verbal blunders by Stanley when speaking to Sophia. Watching the Aunt work her own brand of magic was also highly entertaining.

4) Locations/Cinematography - Total Thumbs Up: From the theater in Germany to the lovely gardens, and the coast of southern France, the locations definitely set the stage. By adding in all the great Jazz and 20's music, it was easy for the audience to be transported back to 1928.

Conclusion: "Magic in the Moonlight" is a nice, quirky romance with an odd but fun cast of characters. The verbal fencing, especially towards the end, made it very fun to watch.