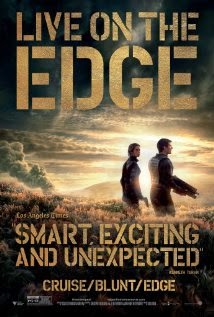 Directed by: Doug Liman Screenplay by: Christopher McQuarrie, Jez Butterworth, and John-Henry Butterworth Based on the Novel "All You Need Is Kill" by: Hiroshi Sakurazaka Cinematography by: Dion Beebe Music by: Christophe Beck

Premise: The Earth is being attacked by an alien race that sprang from a meteor that fell from the sky. After a long struggle, Humanity has had its first victory and is amassing all the firepower possible to go on a large, decisive offensive. Major Cage, an ad executive before the war, is told he will be at the offensive so he can report on the progress. Cage balks at going, even trying to blackmail the general into not sending him. This only gets Cage knocked out and sent directly into a misfit group who'll be hitting the beach at the front lines. Surviving for a few minutes longer than many of his compatriots, and getting a lucky kill on an Alpha, Cage then wakes back up almost a full day before his death. (Rated PG-13)

1) Acting - Total Thumbs Up: Tom Cruise plays outside his normal zone as Major Cage. The fear and wheedling cowardice of the character, and the way he even tries to act brave only because it might get him out of things, was very well done. Emily Blunt was a lot of fun as Rita. Her unhappiness at having lost the power then her surging hope when she finds out Cage has it, as well as all the awesome expressions of disappointment as she tries to train him all added a lot of flavor. Bill Paxton as Master Sergeant Farrell, along with Terence Maynard were great foils as Cage repeated time. The two men were like mirrors of the changes as Cage replayed the days over and over, their ordered world and expectations kicked out from under them as Cage matured.

2) Special Effects - Total Thumbs Up:  Lots of cool special effects in the film - the soldier transport, the exo-suits,  the exercise room, the aliens. The aliens were especially fascinating. They still gave them mouths and two eyes, strangely humanizing them, but this might have been intentional. If they'd not given them obvious eyes, it would have made them ten times more creepy and alien and since the film is rated PG-13, perhaps they didn't want to creep young viewers too much. Still, they way the aliens moved, their octopus like arms, all were awesome work.

Most impressive is the scene where Cage and his troop reach the battle. The chaos was intense, with creatures and men are fighting everywhere. The mini helicopter incident also came out really well. The minivan section, even more so.

3) Plot/Story - Total Thumbs Up: There are a ton of things that I loved about the plot. They even took some movie fallacies and actually gave them reasons for happening and then did things to surprise you on top of it. The hero, for example: Cage is a total coward. Only self preservation propels him once the weirdness kicks in, and if you watch closely, he still tries to weasel out of everything despite the progress he makes. It's a hard won battle for him to finally get past it - it wasn't instantaneous and the signs are there that he's still trying not to be involved. Loved, loved, loved this.

The other aspect that would seem suspect but which they pulled off brilliantly was the aliens having one central main intelligence/hive mind that if defeated humans would win everything. No easy victory here. Despite the fact that one decisive blow could end it all, the creature is aware of this and has taken steps. Major and surprising steps! Even multiples steps! And the humans have to pay a high price to pay to even get a shot at trying to succeed.

Another major point I loved, though it was super understated, was how Cage found out information on those around him to use later. We only see one instance of this, but that one time basically sets the stage for all the others, and explains why he knows things these people would never tell another soul - death side confessions. A lot of them. Gave me chills just thinking about how many times he had to watch them die over and over to get all the info he did.

Time travel is tricky, and while they explain some things, they don't explain all. Again, they give you just enough information to figure things out if you think about them. Hubby and I had a fun discussion afterwards. The altered DNA brought Cage and his memories back each time, but also seemed to bring back his body slightly changed, yet repaired. So muscle memory and other physical skills always came back with him. At the end, a seeming incongruity actually makes sense when you think of the stolen level of power achieved.

Little comedic moments, and just watching how Cage changing changed those around him as he'd come back for yet another round, kept the repetition intensely interesting.

4) Stunts - Total Thumbs Up: There were a ton of stunts and a ton of stunt people in most of the 'gags'. Between the explosions, crashing vehicles, and the spinning aliens, there were people running, flying, getting bashed about and more on a pretty constant basis. Like I mentioned earlier, the attack area was chaos personified. It definitely had the feel of the landing at Normandy back during World War II, but even more intense and with aliens,. Great work by everyone.

5) Locations/Cinematography - Total Thumbs Up: Filmed mostly in the UK, there were a lot of lovely spots used for the film. Once Cage and Rita realize where they truly need to go, we got some nice sweeps of the French countryside. The Louvre scenes also were nicely done, though in truth, it did give the feel of a sound stage despite the size of the area.

Conclusion: "Edge of Tomorrow" is a great piece of science fiction. Lots of action, stunts, and special effects, dressed around a good solid plot. They even take a couple of bad movie habits and make them work! If you can manage it, definitely see it in IMAX 3D or regular 3D.

Rating: 4.5 out of 5 (Hubby's Rating: Worth Paying Full Price to See Again)

Posted by Gloria Oliver at 7:39 AM