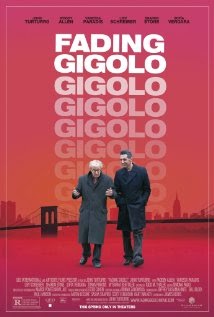 Premise: When Murray is forced to close his third generation bookstore and his friend Fioravante can only find enough work to barely get by, a strange conversation at Murray's dermatologist's office gives him an idea of how the two of them might make some extra cash. Murray will look for women to approach and then offer them his friend to give them a good time - for pay. Hesitant at first, Fioravante eventually gives it a try. And that's when the fun begins. (PG-13)

1) Acting - Total Thumbs Up: John Turturro was a lot of fun as Fioravante. His unassuming nature and rough looks hide a subtle and very talented Renaissance man. Woody Allen is the funny side of the seemingly odd duo, not only talking his way into mischief, but seeking those who truly need the services his friend can provide. Vanessa Paradis did some brilliant work, going from the reclusive widow to the freed, refreshed blossom, yet without losing sight of what she truly wants.

2) Plot/Story - Thumbs Up: "Fading Gigolo" is a story about mingling ways of life and trying to do more than just get by. Set in New York City, it mixes people from all together from different cultures. Half the fun is watching all the subtle touches which show us what makes New York City what it is - a pool of cultures and ideas.

As we watch the experiment unfold, the story leads all those involved to discover who they are or to  rediscover something they lost somewhere in their lives. A lot of this growth is very understated, much like Fioravante himself. He seems plain and simple, but there's an amazing amount of depth to him. As lost in his own way as his clients.

A deeper current in the film seemed to be about home - about where we belong. But it also encouraged us to see past that and to not be afraid of experiencing what else is out there.

3) Locations/Cinematography - Total Thumbs Up: The film contains some truly lovely shots of different parts of New York City. The different homes and places fit well. In a pivotal scene, the walkway and the surrounding woods and park couldn't have looked more beautiful or ethereal.

4) Music - Total Thumbs Up: Aside from the very addicting snipped of music which is woven throughout the film, the score is very eclectic. Like many bits of dialogue here and there, the music too is used to show the diversity that is New York City.

Conclusion: "Fading Gigolo" is a quirky, entertaining, and thought provoking film. Watching these two men venture off into such an unusual business for people their age made for some definite fun.