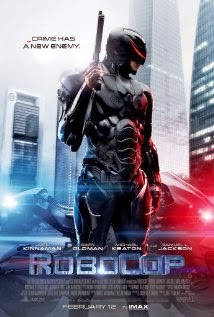 Directed by: José Padilha Screenplay by: Joshua Zetumer Based on the Original 1987 Screenplay by: Edward Neumeier and Michael Miner Cinematography by: Lula Carvalho Music by: Pedro Bromfman

Premise: Getting too close to criminal Antoine Vallon and the cops covering up his crimes, Alex Murphy inadvertently puts himself in the line of fire and is almost killed by a bomb. Omni Corp is trying to find a product that will appeal to the American public and help them bypass the current laws forbidding the sale of robots to law enforment, so they decide to try to make a cyborg, so all parties will get what they want. All they need is a worthy candidate, and Alex Murphy is the perfect candidate for their project. (Rated PG-13)

1) Acting - Total Thumbs Up: There were so many unexpected but wonderful actors in this film. Joel Kinnaman was well cast as Alex Murphy/RoboCop; he showed great range in his emotions as Alex struggled to reconcile himself to his new way of life. Abbie Cornish did some marvelous work as Clara Murphy. Her distress, sorrow, and anger as she attempts to deal with what has happened to her husband were palpable. Gary Oldman as Dr. Dennett Norton was fun to watch as the philanthropist got dragged down the moral ladder due to pride. Michael Keaton was a blast as Raymond Sellars. (I especially enjoyed the in-joke reference to Batman with his preference of black.)

2) Special Effects - Total Thumbs Up: The special effects work on the film was great. And they stayed faithful to the 1987 film giving homage throughout. The first time Murphy gets up and does the signature turn with the matching sound effects, I almost squealed in delight. Even keeping the big OCP ED 209 robots and making them look close to the originals. Yet it's the image of Alex Murphy when they strip away all the parts of his exoskeleton that will stay with you - a horrifying and yet totally fascinating sight. The little touches with the lungs but especially the throat make it very believable.

3) Plot/Story - Total Thumbs Up: Based on the original script of the 1987 film, in many ways they definitely improved it, but in others they didn't do as well. A lot of what made the first film were the little things in the background, the advertisements, the news commentary--they more than anything spoke of the decline of society and the type of world Murphy lived in. Not a lot of this is seen in the remake, though they did use the character of Pat Novak to get a lot of the same ideas across, even using it to poke at some of what we see right now in our own lives.

Plot wise though, there were many improvements. The seduction of Dr. Norton to the 'dark side' was one of them. Letting us see more of what Clara and David went through was another. Watching Sellars and his dream team wiggle around putting out fires or coming up with ideas was fun, too. The only cheap shot on the plot was the way they set up to have to drop Alex's humanity. Who in their right mind would decide it's a good idea to dump terabytes of information and video into someones brain five minutes before a televised conference? Especially since it's never been done before? But aside from that, I very enjoyed how they changed the script.

I also give them extra kuddos for daring to have someone change their minds and yet not stupidly say so to the bad guy's face and thus avoid painting a giant target on their chest.

4) Stunts - Total Thumbs Up: I'm not a fan of shaky cam, but at least they kept its use to a minimum. I'm happy to say it never became an issue. The stunt work looked good regardless, which is always a plus.

5) Music - Total Thumbs Up: Special thanks to the music department and Pedro Bromfman for using the original RoboCop theme and weaving it in and out of the film's score. Just as eclectic as the original soundtrack, this one has a lot to love about it.

Conclusion: RoboCop is worth watching by both fans of the original films and those new to the franchise. Plenty of nostalgia is sprinkled throughout the film for those who saw the 1987 version. Lots of good mental fodder to ponder afterwards. Also check out Omni Corp's website. Loved the Keynote.

Rating: 4 out of 5 (Hubby's Rating: Worth Full Price to See Again.)