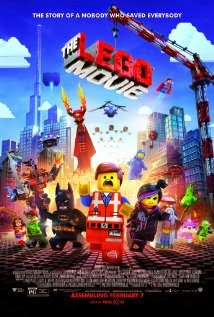 Premise: Lord Business steals the world's greatest weapon from its guardian Vitruvius. Vitruvius warns Lord Business of a prophecy in which a very special person will discover an artifact, and with it bring him to ruin. Eight and a half years later, the one who was prophesied finally appears. Yet he's not exactly what anyone expected. (Rated PG)

1) Acting - Total Thumbs Up: The film had a totally fun cast. Chris Pratt as the empty headed Emmet was fun. Elizabeth Banks made Wildstyle both tough and secretly insecure. But it was Batman, voiced by Will Arnett, who stole the show. His dry delivery of Batman's lines was perfect. Liam Neeson wasn't far behind with his rendition of Bad Cop/Good Cop. Recording for this film must have been a blast.

2) Artwork/Animation - Total Thumbs Up: Using Legos as a film medium was a stroke of genius. Between the versatility of all the things you can make with them and all the great colors, they made the imagination flow. Especially as we move from the seemingly normal city, to the other worlds also present in the Lego realm, but which had been cut off from each other by Lord Business and his mechanical minions. We're even teased with glimpses of even more amazing and different worlds than the ones we're eventually shown. (That was a Mark 5 I saw flash by, right?)

The Wild West area with it's canyons and Death Valley feel was great. Cloud Cuckooland was even more amazing and full of chaos. (I saw Ducky Momo!) The turbulent sea scene was awe inspiring not just in execution but in the amount of work that must have gone into creating that scene alone.

The animation itself moved smoothly and there's so much going on you can't keep track of it all. I aodred that even the usual intro slides on who made the film were done in Lego. Visual in-jokes and pop culture references from the 80's to modern times abounded. The range on the facial expressions was excellent and utterly complimented the voice acting.

3) Story - Total Thumbs Up: While the plot appears simple at first glance, it has a lot more going on than is immediately apparent. Emmet is also not the only one with things to learn about himself during the journey. And while several plot point resolutions are totally expected, others will catch the audience totally by surprise. I would say more, but I don't want to spoil it.

There are plenty of comedic moments, as well as in-jokes and pop culture references in the script. Long time followers of DC super heroes will find much to be amused by. Batman pretty much steals the show. (As he should.) He even wrote a song. Yes, Batman sings.

The old battle of a thousand wars is here as well - Chaos vs. Order. And in a world made with Legos, what could be more awesome?

Conclusion: "The Lego Movie" is a lot of fun. There's plenty there to keep the kids occupied and the adults amused. Yes, like it or not, you'll probably be singing the Awesome song by the time you go home. (You can pick from the Awesome, the Remix, Saloon, or the Unplugged versions!) Just to see all the amazing things they do with the Legos made the film worth going to see.