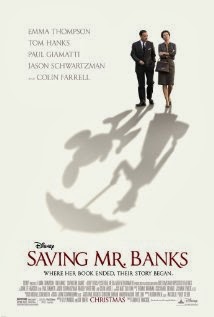 Premise: After a twenty year pursuit to get the rights to the character of Mary Poppins, Walt Disney finally has managed to get author Pamela Travers to come to LA. Despite money troubles, however, the last thing the author wants to do is give her treasured character away. As the battle of wills continues, a secondary story unfolds giving a deeper insight of why and what has shaped these two great people into who they are. (Rated PG-13)

1) Acting - Total Thumbs Up: Emma Thompson was a force of nature as the indomitable Mrs. Travers. Throughout the film she gives the audience little visuals cues which help the audience learn more about who she really is. As events proceed, it is easily visible as she opens herself more and more to the world again. Tom Hanks gave an excellent performance as Walt Disney. Colin Farrell was superb as Mr. Goff - just the right amounts of dreamer, father, and eventually broken man. Ruth Wilson too was quite excellent as Mrs. Goff - she had few lines, but her face and expressions told so many things. Annie Rose Buckley was too delightful as the free spririted Ginty. Paul Giamatti as Ralph added such an extra nice touch to everything. To be honest, all the actors, regardless of the size of their roles, added so very much to every single scene they should all be applauded.

2) Story - Total Thumbs Up: One of the things I totally loved about this film was the fact they took the mantra every writer must follow - "Show, don't tell". Because half the film is from the point of view of a young girl, there's a lot of information the audience needs which is given to us visually. This placed more than the usual weight on the actors, but they pulled it all off perfectly.

There were also some wonderful parallels between Mr. Goff, Mrs. Travers, and Ginty. Mrs. Travers has survived, but also hidden her true self so deep down, she's almost dead in everything but fact. The film also centered a lot around what makes us who we are. Adversity can make us push harder, do better, as well as crush us. The different results are there for all to see.

This is not a movie for kids. It's most definitely for adults. But for all those who've ever seen the film "Mary Poppins" the nostalgia levels will be very high. This makes the watching of the film all the more poignant as we discover all the background and effort and lifetimes that made "Mary Poppins" what it was.

Even the film's title holds multiple pieces of significance. This was a very multifaceted film. Kudos.

3) Locations/Cinematography - Total Thumbs Up: Following the strictures of "show, don't tell" the locations played a very important part in conveying the story. The original Goff house as the Goff family departs, and the eventual arrival at their "new" home but the first of many visual clues. Just seeing the two locations imparted a tremendous amount of information to the audience.

The recreations of the 1960's Disney World and the production offices were great. And the hotel room where Mrs. Travers stayed at - the extreme attempt made to try to make her feel welcome - it screamed of desperation. Lovely.

4) Costuming/Makeup - Total Thumbs Up: From the clothing in 1906 Australia to 1961-1964 Los Angeles, there was an awesome amount of attention to detail. You never doubted which of the two timelines you were watching at any given time.

Conclusion: "Saving Mr. Banks" is a great film. I think it is a "must see" for anyone who's ever loved or seen "Mary Poppins". However, this is not a film for kids. It's a serious film with serious topics. It will, however, definitely enhance your appreciation for the 1964 film. If you get in the least bit emotional at movies, take tissues with you! I guarantee that you'll need them. Also, make sure to sit through most of the credits - between the photos and a recording they shared, it clinched the whole experience.