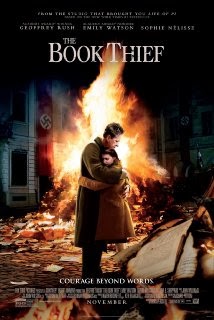 Directed by: Brian Percival Novel Adaptation by: Michael Petroni Based on the Novel by: Markus Zusak Cinematography by: Florian Ballhaus Music by: John Williams

Premise: Death becomes intrigued by a young german girl called Liesel. So he narrates her story so we too can see why he found her so very interesting. We follow her life during the years leading up to and during World War II. (Rated PG-13)

1) Acting - Total Thumbs Up: Sophie Nélisse made a very compelling Liesel. Her big, expressive eyes will charm just about anyone. Geoffrey Rush was fun as the laidback, mostly out of work, Hans. Emily Watson was even more fun as his dour, yet slowly defrosting wife. Nico Liersch glowed as Liesel's best friend Rudy.

2) Plot/Story - Total Thumbs Up: I've not read the book the movie is based on, so can add little from that perspective. I will say though that within a minute, the film had me enthralled. From the previews I'd seen, Death was never mentioned. So having him as the narrator of the story was very surprising, and quite intriguing. While the film would have been fine its own, having Death as the narrator, gave it just that extra bit of spice to make the experience that much more of a treat.

The pace was a little slow in places, but this was overridden by the fascinating look at a small German village and the ways their culture started changing, the peer pressure, the rising sense of fear in some, or ardent fervor in others as change took over the land. It's definitely a side of the war no one hears much about. The themes circled a lot around family - what it is to have it, and how to sometimes make your own. Even better were the hints of the depth in the people around you - the assumptions we made in those first few moments, yet by looking deeper, we find they're totally different, even more than we ever thought.

3) Locations/Cinematography - Total Thumbs Up: From the long stretch of snow covered fields, to the cozy and worn look of Heaven street, the locations for the film were outstanding. The cinematography, too, did much to enhance the experience with slow swooping passes down the streets and the occasional odd angle for a different point of view, almost as if what was being seen all came through Death's own eyes.

4) Costuming/Makeup - Total Thumbs Up: The story used clothing to tell a lot of little things through what Liesel and others wore. Rosa dressed and acted quite dourly, and though her initial impression upon the audience is quite unfavorable, it was the little things that gave her away as someone who cared a lot. Liesel's clothes were always better than hers, better cared for and colorful than hers, but nothing too obvious. A lot like the kindnesses from the woman herself.

Conclusion: The Book Thief was an entertaining tale of an unusual time, narrated by the most unlikely of story tellers. Quite delightful. Shows what the power of words and books can mean to those who read.

Rating: 4 out of 5 (Hubby's Rating: Worth Paying Full Price of Admission to See Again)
Posted by Gloria Oliver at 6:00 AM