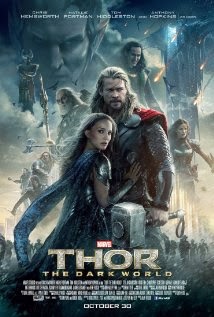 Premise: Over five thousand years ago, though the time of darkness drew to a close, the dark elves discovered a way to return the universe to how it had been before. Stopped after a bloody war by Odin's father, the dark elves and the aether weapon they'd hoped to use were long thought destroyed. As a new convergence of the nine worlds nears, Jane Foster stumbles upon the fact neither is actually gone. (Rated PG-13)

1) Acting - Total Thumbs Up: Chris Hemsworth reprises his role as the hammer weilding Thor. He's matured in the two years since his first arrival on earth and that maturity comes across easily thanks to Chris' skills. Natalie Portman also returns as Jane Foster. I loved all the weird quirkiness of the character, and it was a lot of fun watching her child like fascination as she gazed upon the people and wonders of Asgard, and 'geeking out' over the science. Tim Hiddleston gives great range to all that is Loki, a character as mercurial as the aether they seek to keep from the dark elves' grasp. Chris Eccleston brought a grave air to his portrayal of Malekith, even as Anthony Hopkins mirrored him in his fury to keep his way of life, even if it took every last living soul to do so.

2)  Special Effects - Total Thumbs Up: Tons of special effects work their magic through the film. From the super cool dark elf ships to the awesome grandeur of the convergence, the special effects team didn't disappoint.

I was very happy they took time to show us more of Asgard. The Asgardians' ceremony for dead was impressive. Even better, they didn't forget, as so many movies and TV shows do, that the headliner wasn't the only one to lose their life. The gorgeous ceremony looked like an amalgamation of viking/Norse, and Japanese traditions. Gorgeous.

The workings of Asgard's defenses were totally fun to watch, but even more so were the cool fighters of the dark elves. The technologies of the two races as well as the 'look and feel' were different from each other, reinforcing their separation, and the dark vs. light aspect of the story. The dark elf grenades were super nasty! They also made for some very cool visuals.

3) Plot/Story - Total Thumbs Up: The story was always moving. Even in parts where you'd expect the action to slow down, they managed to do things in such a way that it kept moving forwards instead. The story also had tons of cute moments - quirky and/or funny bits that added layers of fun. One of them was an unexpected Captain America cameo - funny and unexpected yet totally fit the moment. Jane's dinner date was another.

The themes of family and responsibility are woven throughout, as well as that of stubbornness and resistance to change. They gave Heimdall some great scenes to play in!

4) Stunts - Total Thumbs Up: The stunt guys were kept very busy in the film. There is a ton of hand-to-hand combat, getting thrown, falling, rolling. The whole department was very busy indeed.

5) Locations/Cinematography - Total Thumbs Up: Whether real or CGI, the cinematography was fantastic. The view during the ceremony for the dead, the close and intimate shots of Asgard, watching the dark elf ship cut furrows in Greenwich, the convergence of the nine worlds, and more - gorgeous! The film is worth watching just for the locations and beautiful shots alone. Wait until you see Thor's view from his bedroom or Heimdall's at his post - food for the eyes.

6) Costuming/Makeup - Total Thumbs Up: Each race and world had their own unique styles of clothing, armor, and even hair styles. Half the fun of watching Jane in Asgard was seeing her go native.

Conclusion: "Thor: The Dark World" easily outdoes the first"Thor" film. The movie is constantly moving and with the fun, quirky bits they throw in, totally entertaining. IMAX, if not IMAX 3D, would be well worth it for the great visuals. Make sure to sit through the ENTIRE set of credits. We get two extra bits, and one is at the very end.