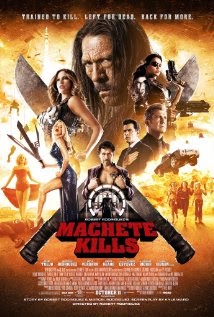 Premise: After his lover is killed in a bust gone wrong, Machete is recruited by the President of the United States to return to Mexico and track down a man named Mendez. Mendez is a madman threatening to use a stolen missile on the US. A missile Machete's girlfriend got a look at before she was killed. So Machete returns to the land of his birth, and finds that the threat to the US is larger than anyone thought. (Rated R)

1) Acting - Thumbs Up: Danny Trejo reprises his role as the man who will not die - Machete. 'Deadpan' is his expression of choice. Demian Bichir was a lot of fun as the multiple personality, crime-lord turned freedom fighter Mendez. Mel Gibson spiced things up a bit, especially with all the great Star Wars references. Amber Heard was totally memorable as Miss San Antonio - she brought a lot of sizzle to the party. Antonio Banderas totally cracked me up. A native Spanish speaker, it was funny watching him play someone who doesn't really know the language. (A bit of inside humor?)

Special Effects Master, now actor, Tom Savini was back as well, having a ton of fun as usual. Rodriguez's twin nieces, Electra and Elise Avellan, also make an appearance. And a special 'thumbs up' to all the guys playing the many faces of El Camaleón - lots of fun!


2) Special Effects - Total Thumbs Up: The main point of the Machete films is to emulate bad 70's and 80's action films. But one thing those old movies did well was flinging body parts, bullets, and explosions. The special effects team for "Machete Kills" has no problem keeping the old traditions alive and even creating a few new ones.

Desdemona's Double D toys rocked! The Swiss Army Machete wasn't, but there are other fun machetes that make an appearance. Voz has some cool weapons too. There's a gun that had yet to be perfected that turns things inside out - major gross quotient. Looked amazing!

3) Plot/Story - Thumbs Up: In 2007 Robert Rodriguez and Quentin Tarantino took film goers by surprise by making the two separate films and fake previews making up "Grindhouse" ("Planet Terror" and "Death Proof", with the fake "Machete" previews), picking up and using all the cheesy and gritty film making of the times and then taking it to extremes. He continued this tradition in 2010 when they actually turned the fake preview in "Grindhouse" to the movie "Machete".

"Machete Kills" has many of the same components as the previous films, but certain violent and sexual aspects have been toned down (so those who loved the previous films specifically because of those aspects may be somewhat disappointed), but all the fun poking at the old films and an attitude of having fun is still there. I even rather enjoyed the 007 feel added to this one. And all the Star Wars in-jokes were a 'hoot'.

The film opens with a preview of the next film supposedly in the sequence, called "Machete Kills Again...in SPACE!". (Very reminiscent of the "Jews In Space" joke from "History of the World: Part 1" by Mel Brooks) That alone was a riot. But pay attention, it's actually telling you all sorts of things. In some ways it could even be considered a spoiler, but it's also a puzzle. So tying the threads together of how they get from here ("Machete Kills") to there ("Machete Kills Again...in SPACE!") was rather fun.

Many of the aspect of the film are over the top, as they're meant to be, but the actual plot and progression of same was actually solid! Made for a nice surprise.

Conclusion: If you're a 'hard-core' fan of "Machete", "Machete Kills" may seem too tame in comparison. But if you're just looking for a good time watching a spoof of 70's and 80's action films, "Machete Kills" won't disappoint. Looking forward to "Machete Kills Again... in SPACE!"