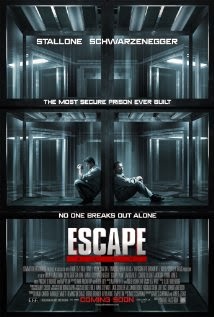 Premise: Hired to break out of a new maximum security facility by the government, Ray Breslin soon finds out that matters aren't as they should be. And that someone has paid to have him kept there permanently. As his staff fruitlessly try to figure out what's happened to him, Breslin must find a way out on his own. (Rated R)

1) Acting - Total Thumbs Up: Sylvester Stallone and Arnold Schwarzenegger together in a film, both with top billing - an action movie fan's dream come true. Stallone's closeups didn't do him any favors, the rheumy eye shots unflatteringly giving away his age, but Schwarzenegger looked great with the gray in his hair and the lovely sculpted beard. Watching the two trade quips and the occasional blow was most entertaining. Arnold had several great lines, and looked like he was really enjoying being part of the film.

Jim Caviezel was creepily delightful as Warden Hobbes. Faran Tahir was very convincing as both an enemy and later as a respected comrade in arms.

2) Special Effects - Total Thumbs Up: "Escape Plan" doesn't have a lot of obvious special effects, but the few that made an appearance were good. The shaft leak and the consequences of same were very well executed. The look and feel of the hidden prison for the most part worked rather well. It very much had the look and feel of a place taken straight out of first person shooter game.

3) Plot/Story - Thumbs Up: In general, the plot was quite entertaining. The clever tactics by Breslin and the inventiveness of some of the sequences were very nice. The prison set up looked great, though in reality it wasn't actually practical. For a hidden prison, with no real ties to any government or morals, the display of following rules like the exercise yard seemed odd. The dehumanizing of the guards by having them wear masks, however, was a brilliant touch.

The biggest problem with the plot was the unconvincing (and therefore unsatisfying) reason for why Ray was betrayed in the film. Otherwise the movie moved at a good pace, had several great moments, and even a surprise or two.

Of some slight amusement is the fact that Jim Caviezel is the warden of this prison. The actor once played Edmond Dantes in "The Count of Monte Cristo" - a man who escaped from an escape proof prison.

4) Locations/Cinematography - Total Thumbs Up: The fact we see Ray break out of a normal prison at the beginning, made for a great visual contrast for when we're shown Hobbes' super facility. The sweeping shots once Ray is able to gleam a clue as to the prison's location did much to truly portray the utter isolation and impossibility of gaining his freedom from Hobbes masterpiece.

Conclusion: "Escape Plan" is a fun action film. It's totally worth going to see it just for the Stallone and Schwarzenegger team up. Keep your suspension of disbelief on the high side and you'll have a fun time.