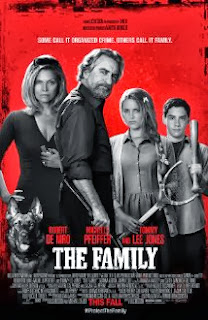 Directed by: Luc Besson Screenplay by: Luc Besson and Michael Caleo Based on the Book by: Tonino Benacquista Cinematography by: Thierry Arbogast Original Music by: Evgueni Galperine and Sacha Galperine

Premise: Adjusting to life under Witness Protection has not been easy for the four members of the Manzoni family. After being forced to evacuate yet another location, this time they end up in Normandy, France. Each of the family members try to do their best to fit in, but being normal is contrary to their natures and they get in trouble no matter what they do. Which might inadvertently call attention to them - and this could mean their lives. Don Luchese, the mob boss Manzoni helped put in jail, is desperate to find them to exact his revenge. (Rated R)

1) Acting - Total Thumbs Up: Robert De Niro was a lot of fun as the head of the dysfunctional Manzoni family. The tone he sets for the character and the reading of the memoirs he ends up writing were delightful. Michelle Pfeiffer clearly showed Maggie's disappointment with her current life, yet also the strong drive to make it work as best she can for her family. Even more fun was watching her subtle manipulations of the CIA agents assigned to them, so she can gather intelligence on those around them and more. Dianna Agron and John D'Leo just about upstaged their older counterparts. They were just too fun to watch. Tommy Lee Jones was a great foil for De Niro, their little conversations totally amusing. The family dog even had great parts.

2) Special Effects - Total Thumbs Up: Though at first it might not appear to be the kind of film needing a lot of special effects, there were definitely a lot of them. Between three different explosions and a second invasion of Normandy, the department was kept quite busy.

3) Story - Neutral: The premise for the story is great. And plenty of issues are covered in the film - from Italian bias, to expected American excess, to making fun of the French (the book the movie is based on is French - and picks on his own people), to bureaucrats that hurt others more than the mob ever could. The relationships built by the story and the motivations of the characters and how they all intermingled was definitely entertaining.

The way the family gets found by Don Luchese and how it had absolutely nothing to do with Manzoni (despite Agent Stansfield certainty to the contrary) only served to show the weirdness that is life.

The film has many mafia movie related jokes. A lot of the cast is from tons of other gangster films. There are even some Scorsese in-jokes as well (He was the executive producer of this film).

Where I felt the film let the audience down was in how it kept building and building and building suspense as they teased the audience not only about the family being found, but especially about there being unusual reasons as to why a perfect mobster like Manzoni had turned snitch. And while the film has a great payoff with regards to the being found angle, they were either much too subtle in giving the answer to the second big item, or possibly never gave it at all. They'd done so much to make us want to know what had driven Manzoni to turn on his mob family, then it was yanked away as if it held no importance whatsoever. This was very disappointing. So much so, it almost ruined the film for me as a viewer.

4) Music - Total Thumbs Up: Though there doesn't seem to be an available recording (at least not any that I could find) the background music for the film by Evgueni Galperine and Sacha Galperine was perfect. Their tracks had lots of fun variations on mobster or Italian themes with some other flavors thrown in. Very nice.

Conclusion: A fun, dark comedy with a nice action payoff - as long as you don't mind being teased and not given an answer on Manzoni's motivation. Though if you go see it knowing they're not going to tell you, you might end up enjoying it all the better.