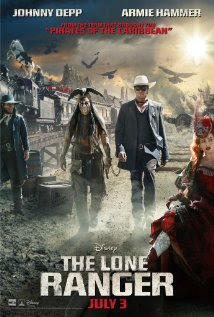 Premise: When a young lawyer and a Comanche brave cross paths during a criminal's escape from a train, the spirits strive to tie them together to bring justice for past and present wrongs - whether the two want to work together or not. (Rated PG-13)

1) Acting - Total Thumbs Up: I'd been pretty excited about seeing this film since I first heard about it. There was a lot of controversy about Johnny Depp playing Tonto, but it never truly concerned me. His bird hat did have me raising a brow, but once seen in context, it was an awesome idea. What did worry me a little was one of the later preview trailers which showed that a comedy aspect had been introduced into the movie. I am happy to say, I worried for nothing.

As Johnny Depp always does, he made the role of Tonto entirely his own. With the way the film begins in a carny in San Francisco, the setup is perfect, not only to introduce the audience to the story, but to set up other things that follow. This Tonto and Lone Ranger are in their raw states, before they became the true legends told of in the stories. As such, Mr. Depp and Mr. Hammer play Tonto and John Reid as the imperfect men they were when their partnership began, and we watch as they are shaped into the legendary partners they become.

Armie Hammer did a great job as the naive, pure and stubbornly principled John Reid. Better were the hints of the man who always felt lacking when compared to his older brother, yet determined to make his own way. Slowly, but surely, John is tempered by experience into a force to be reckoned with. Major kudos too to Mason Elston Cook as the young carny goer Will. William Fichtner was super creepy as the flesh eating Butch (Wendigo) Cavendish.

Kudos to the Horse Spirit and the Crow - alive or dead, they almost stole the show!

2) Special Effects - Total Thumbs Up: "The Lone Ranger" doesn't rely on a lot of CGI. Most of the special effects are 'old school' - as in done with real materials. Railroad tracks, bridges, trains, horses, guns, all the mainstay items of the old Westerns were there. And the actors used them, rode them, and more. A few big explosions were thrown in as well.

3) Plot/Story - Total Thumbs Up: In the tradition of "The Princess Bride", "The Lone Ranger" is told in the manner of a story, though not one from a book. While in a lot of other films this type of setup would be intrusive, in the manner the story of John Reid and Tonto was handled, it worked superbly.

Family, brothers, and belonging are big themes in the film as well as sticking to your convictions, justice, the fact not all things are possible, and facing one's mistakes. A bit of mysticism is thrown in, most of it left to be believed or not by the audience. Yet by its use, they've left the franchise open, because while they do solve one set of problems, nature's imbalance was not, so there are more adventures waiting out there.

The poor treatment of Chinese immigrants and Indians alike wasn't sugarcoated. They also never pretend that two men alone can change that facet of history, but they can and did what they could. The extra scene during the end credits was poignant in a quiet, understated way - pressing the point that while they may have stopped one evil, all things were not within the duos power to resolve.

4) Stunts - Total Thumbs Up: The stunt department did an outstanding job. Horse riding, gun shooting, fist fights, train robbing, barn burning, they pulled off all the classic Western stunts with great aplomb. That self assurance made several gags look even more awesome than expected. Johnny Depp pulled several of those and they were made all the more outstanding due to the ease in which they seemed to be carried out.

5) Locations/Cinematography - Total Thumbs Up: The locations for the film were iconic. Between Utah and New Mexico you couldn't have hoped to get more of a Western feel than these locations will invoke on viewers. Monument Valley has been a favorite Western filming spot for a couple of generations. So seeing all these awesome backdrops will take you back to all the Westerns you'd ever seen before. And the excellent spanning shots of all these nostalgic places made the visuals an absolute treat.

6) Costuming/Makeup - Total Thumbs Up: For the work they did with Johnny Depp alone, the makeup department should get an oscar. (You'll know what I am talking about when you see the film.) The costumes too looked great and in period.

Johnny Depp's look for Tonto has been said to come from a painting named "I am Crow" by Kirby Sattler in 1991. In many ways, it truly was very apt and totally fit once put in context.

7) Music - Total Thumbs Up: Hans Zimmer brought several lovely tracks to the film for background music, but as anyone who grew up seeing the original "Lone Ranger" series will know, there's only one real theme they're waiting to hear - the final section of the William Tell Overture. The audience gets a taste of it close to the beginning, but it's full use is reserved for the climax. And to be honest, I couldn't have been happier!

Conclusion: Though bits of it seem a little like something out of an Abbot and Costello movie, all the pieces are there to make "The Lone Ranger" a fun, Western epic in the tradition of the original series. The way it was told, this story will be a great introduction to younger generations to the old legend. Most of the audience was applauding by the end.