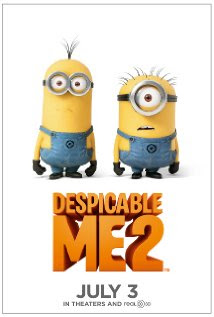 Premise: Gru is approached by AVL, the Anti-Evil League, after an entire laboratory in the Arctic Circle is stolen. AVL wants his help in identifying whoever took it and retrieving the dangerous compound PX-41. At first having no interest, Gru changes his mind when Dr. Nefario leaves his employ. Plus it's also a great way to avoid his neighbor's and daughters' efforts to set him up with women to date. (Rated PG)

1) Acting - Total Thumbs Up: All the fun people and the great characters from "Despicable Me" are back! Steve Carrel is too much fun as Gru. And with the new emotional challenges he's presented with in this film, he excels even more. Kriten Wiig had been part of the last film as Miss Hattie, and she's back again, this time as Agen Lucy Wild, one of the members of AVL. Her voice acting range is great, so I can definitely see why they wanted her back. She's great as the super competent, yet overeager Agent Wild. Directors Pierre Coffin and Chris Renaud also bring back their own voices for all the beloved minions in Gru's employ.

New to the Gruverse is Benjamin Bratt as Eduardo. He had to have had a blast playing the character because it shows. Though I have to say his chicken almost succeeded in upstaging him.

2) Animation - Total Thumbs Up: Illumination Entertainment's quality of animation is superb. The attention to even incidental detail adds a lot to the overall effect. Even more fun are the telltale angles and camera sweeps used in other types of films which they recreated for theirs to bring forth specific genre treatements. The very beginning of the film is a slow, winding shot of the Arctic tundra and the lab facility being hidden there. You'll forget you're about to watch a comedic animated film, and instead think you're about to watch a 007 spy thriller.

Visual gags abound. Not only do we get our fill of the minions and their antics, but the film is filled with other more subtle visual jokes and in-jokes, many from spy and science fiction films. Gru at the toupee shop trying to scan for trace elements of the missing PX-41 while keeping the shopkeeper unaware was crude but utterly hilarious. The scenes with the chicken were just too funny. (The chicken gets used in a hilarious in-joke from the movie "Alien" that was too hilarious) Not to be outdone, the minions do music parodies at the end of the film that will have parents in stitches.

The flashback to El Macho was so over the top it was fantastic. And wait untill you get a look at how to enter the secret lab! (And make sure to stay for the credits - minion mischief abounds as they hold auditions for the 2014 spin-off movie "Minions"!)

3) Plot/Story - Total Thumbs Up: The plot has several threads which interweave with the whole. On the one hand you have Gru trying to find a niche to further a career of some sort and support the girls, while also spending time with them and watching them grow. On another, the neighbor and the girls are trying to match Gru with someone to date, though unknown to them Gru has only had bad experiences in the dating arena. Add in the complication that Margo is getting old enough to notice boys herself, and Agnes wondering what it is to have a mother, and the story now has an explosive combination of themes to explore.

And yet there's more! Throw in a supervillain, an aggression increasing potion, and a mall full of suspects, and there's plenty to keep the kids and adults enraptured throughout. (The guacamole chip hat was awesome!)

4) Music - Total Thumbs Up: All the great themes from the original film are back! And they've also added new ones. It was obvious they had a lot of fun with music in this one. Especially the parodies.

Conclusion: "Despicable Me 2" was everything and more than we could have hoped for in a sequel. You'll keep replaying certain moments in your head, because they were just so much fun. Totally worth it!