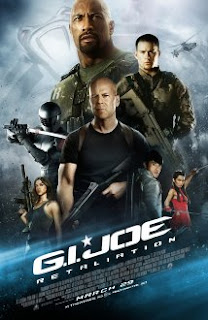 Premise: After finishing a huge op to recover nukes from Pakistan after its President is assassinated, the Joe's get ambushed and almost wiped out when sneak attacked in the desert. Roadblock, Lady Jaye, and Flint let the world think they died with the rest of their friends as they seek to find out what happened. Soon, they realize Cobra is involved. And they're going to make them pay. (Rated PG-13)

1) Acting - Total Thumbs Up: Channing Tatum and Dwayne Johnson show great rapport with each other as Duke and Roadblock - wish they'd kept on with that. Adrianne Palicki manages to look both tough and sexy as Lady Jaye. Ray Park once more brings his considerable skills in playing Snake Eyes (And while this suit was better than the one used in 2009, the look is sadly not quite there yet.) and imparting moods or opinions with body language. Jonathan Pryce got the double fun of playing the President and his own evil replacement. Walton Goggins dazzled as Warden Nigel James, being both saucy and fan boyish about his important prisoners.

2) Special Effects - Total Thumbs Up: With the Joes and Cobra one expects toys, explosions, fire fights, and general chaos. We get plenty of that! I especially loved Firefly and his little bugs as well as his multi-rocket bomb motorcycle.

The Tibetan like monastery in the mountains looked awesome. The fights with masked ninjas and the rope hopping along the sheer cliffs, as Snake Eyes and Jinx try to make their escape, were totally fun.

3) Story - Neutral: Sadly, a lot of the enjoyment of the film was sucked away by the pockets of ignored reality in the plot. My husband, who is totally a fan of explosions and gunfights, was so brought down by the lack of explanations on how certain things were achieved (Like replacing a large portion of the secret service without anyone being the wiser) that it really dropped his final rating. Explanations that would have taken only a moment to impart could have corrected this, but without them the plot seemed heavily contrived just to make certain events occur. (Don't get him or me started on the destruct button on Cobra Commander's briefcase for the satellites. That made no sense whatsoever - he had the world in his grip.)

Protocols at the holding facility were rather poor and not followed. If they'd capped the open container back instead of shooting it, problem solved. It was amazing at the number of thick doors not used in several different places to keep the people out, but rather were left open with guards moving outside, leaving them pretty much accessible, when they wouldn't have been otherwise.

Another sad point was the lack of prominence by certain characters. If they were used in the first film, they almost had no place or were not even present for the second. We saw more of Storm Shadow than Snake Eyes. And Cobra Commander pretty much just walked in and out of places without doing much. Even the plan being activated during the film didn't come from him. It was in full swing when he got there.

So despite the great work from all the other departments, the bad plot pretty much sunk the whole ship.

4) Stunts - Total Thumbs Up: Tons and tons of great fight scenes. They did get a little too close when filming them on them on occasion and shook them a bit more than necessary, but overall were quite good. I especially enjoyed the fist and gun fight between Roadblock and Firefly towards the end. The ninjas on ropes combat was quite entertaining as well. And watching the Joes in action in the two sections at the beginning was quite satisfying.

5) Locations/Cinematography - Total Thumbs Up: Great shots of places like Tokyo, Washington DC, the monastery in the mountains, and more. The interiors of these same places matched the exteriors therefore keeping the symmetry of the locations, which worked well.

6) Costuming/Makeup - Total Thumbs Up: The Joes sweated, got hurt, got dirty, and Lady Jaye never looked like she'd just walked out of a Salon except on the mission where she was supposed to, so kudos for that.

Conclusion: Fun action scenes, cool fights, and fun weaponry! But these are sadly spoiled by the contrived and thin plot. If you go in knowing the story itself needs help and ignore most of it, you're liable to better enjoy all the good stuff that's definitely there.

P.S. You can get all the GI Joe Collectibles you might ever want at the G.I. Joe Collectionary.