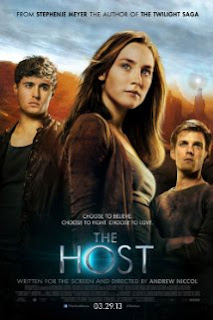 Premise: Earth has been taken over by an alien race that uses human bodies as hosts. Rather than be taken by them, Melanie Stryder attempts to take her own life by jumping out a window. The Seeker who watched her do this decides Melanie would make an excellent host. The Seeker's goal is to use Melanie's memories to hunt down the few remnants of unpossessed humans left. But Melanie's will is even stronger than anyone anticipated. Rather than be destroyed or totally subverted within her own body, Melanie is aware and fights against the alien inside her, hoping to somehow figure out a way to get back to those she loves. (Rated PG-13)

1) Acting - Total Thumbs Up: Saoirse Ronan did a spectacular job playing the Wanderer, and the imprisoned Melanie inside her. Saoirse gave each of the two beings unique voices and personalities so it was easy to believe she had two people taking residence inside the same body. Diane Kruger was outstanding as the dogged Seeker trying to find the Wanderer(Wanda)/Melanie no matter the cost. Max Irons and Jake Abel also gave good performances, easily showing the conflict each had for how they viewed and felt about Wanda/Melanie.

2) Special Effects - Total Thumbs Up: I loved how the aliens looked - semi-energy beings with ganglia - it was a great effect. There are two emotional automobile crash scenes that got stitched to the film so well they looked eerily realistic in the damage to the cars and to the people inside them. The glow worm cave was fantastic - you could honestly think you were looking into a picture of a gaseous and star seeded section of space. The alien 'spaceport' was utterly fascinating. I also think the special effects department did a great job with the mirror banks used to reflect light to grow plants inside the caves. The wheat field itself also looked amazing.

They did a great job too on Jamie's festered wound (looked so nasty!) and the healing sequences for both Melanie and Jamie. You could almost see Jamie's cut weaving itself back together. Nice!

3) Plot/Story - Thumbs Up: I haven't read the novel the movie is based on, so I can't make any comments on how it translated to film. I will say that as long as you don't question how Earth came to be in its current state or what technology should have been available to the aliens with which to find a few pesky humans, the movie's plot works pretty well.

Though you can piece together some of the alien's social structure, it would have helped the film if they'd delved into it a bit more than they did. A greater understanding of this seemingly super stratified system (as implied by the use of occupation titles) would have helped viewers understand why some of the 'Souls' had not been bothered by their antagonistic way of life before. (Where their technology came from or how they were able to take over the first human, especially after seeing that the standard transfer process couldn't be done without help would have also helped plug some of the huge holes in the nonexistent back story.) Baring that, however, the film did do a great job bringing up all sorts of issues to both sides, and not 'sugar coating' most of them. The voice-over technique for Melanie's trapped self worked really well for imparting her thoughts to the audience.

And typical of a lot of young adult books, there are multiple love interests for the heroine. Except this time there was a nice twist - there are two heroines in one body, and they both like different guys. This made for some quite poignant and also funny moments. Jamie's infected wound, sadly, seemed somewhat contrived.

5) Locations/Cinematography - Total Thumbs Up: My inner geek screamed the first time we got the gorgeous spanning view of the desert area where the humans kept their hiding place (Worm Sign! Worm Sign! ("Dune")), something which will sadly not occur to most of the young people watching the film. I totally loved the cave chosen for their hideout. (The wheat field made me think of those built inside mountains or underground in the PC game "Mine Craft".)

While a lot of places looked normal, they did do one caveat to how the aliens had changed the planet by the giant, plain store called The Store. Their simplistic labels and naming of things was a nice touch too.

6) Costuming/Makeup - Total Thumbs Up: The costumes for the Seekers in their startling white worked very well. The shoes were not, but I am giving credit to that 'faux pas' to the aliens themselves. The ways the eyes looked on all who had aliens inside them worked really well and had just the right touch of creepy to it. There was good consistency too on wounds and natural healing.

Conclusion: If you ignore the science and technique of how the Souls took over the world, the film was well paced, thought provoking, and even quite humorous. Hubby said it would make a great date movie as it has a mix of romance, shootings, and car chases to give both sides what they like.

Posted by Gloria Oliver at 8:26 PM