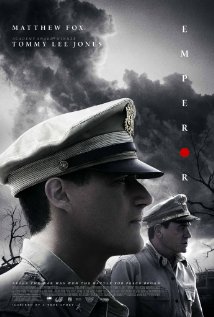 Directed by: Peter Webber Screenplay by: Vera Blasi and David Klass Based on the book by: Shiro Okamoto Cinematography by: Stuart Dryburgh Original Music by: Alex Heffes

Premise: After General MacArthur and his entourage arrive in Japan for the occupation after the country's surrender, he tasks Brigadier General Bonner Fellers with finding proof, one way or the other, with regards to Emperor Hirohito's involvement in the decision for Japan to enter World War II. While Bonner struggles to complete the seemingly impossible task within the ten days he's been given, he's also searching for the woman he fell in love with years before - the Japanese beauty, Aya.  (Rated PG-13)

1) Acting - Total Thumbs Up: Matthew Fox did a great job as Fellers. The tensions pulling his character in different directions between his hope and despair about finding Aya; his need to find evidence one way or the other about the Emperor; trying to respect Japanese traditions even as they make his efforts more difficult; his pain and horror at the devastation of places he'd frequented before the war; Matthew Fox brought these forth for the audience to see and feel with him every step of the way.

Tommy Lee Jones was wonderful in his portrayal of the enigmatic General MacArthur. Colin Moy had us guessing as he kept trying to sow discord to make things go his way. Eriko Hatsune embodied Japan's promise as well as imparting different views and troubles for women of that time.

2) Special Effects - Total Thumbs Up: The film showed some of the best and most realistic looking decimated areas - and they spanned the breadth and depth of the screen without looking like they'd been added on. The shot of Tokyo's burning skyline was horribly eerie.

3) Plot/Story - Thumbs Up: The story is told from General Bonner Fellers' point of view. As we follow him during his investigations, the audience also gets to see into his past, to understand some of the needs that are driving him. Being acquainted with both worlds, he's the perfect medium by which to introduce all the different sides and points of view on both the war, the world, the Japanese people, and what drives them.

Adding in the concurrent story of his search for Aya, we also catch a glimpse of the feelings the survivors felt as they searched for loved ones and saw places they loved totally destroyed beyond recognition.

It was utterly fascinating seeing into this period of time. The many ways it could have all gone so terribly wrong will make you shudder.

4) Locations/Cinematography - Total Thumbs Up: Filmed in Japan and New Zealand, there was no shortage of great locations - the outside of the real Imperial Palace, old fashioned Japanese classrooms, country homes with beautiful gardens and ponds. Many places seen in the flashbacks are revisited, shocking us with the devastation brought upon them during the war. Others appear untouched by the bombings, but the wounds are hidden inside, for many of those who'd lived there are now gone.

5) Costuming/Makeup - Total Thumbs Up: Fantastic job by the costuming and makeup departments. Great attention to detail with the styles of clothing and hairstyles popular in the different places and times.

Conclusion: An emotionally moving, fascinating, and multifaceted view of a pivotal time in history. Matthew Fox was outstanding. The longer the film went on, the more human he became, and the more layers were uncovered in the complexity of those manipulating the times. If you're only looking for something full of action and explosions, though, this won't be for you.

Rating: 4 out of 5 (Hubby's Rating: Worth Full Price of Admission)
Posted by Gloria Oliver at 10:24 PM